There is nothing like spending a Fall afternoon, in the oasis that is your neighborhood park, enjoying live bluegrass, splendid food truck cuisine, and a cold, crisp beverage from one of the local purveyors pouring on that given Saturday. The event was the Harvest Festival, the park was Tower Grove, and I hope some day we can do it again.

Tower Grove Park has been the anchor of the many tight neighborhoods that border it. Mine, Tower Grove East, is, yep, East of the park. The entrance for us is off South Grand, and frankly, I prefer it to the Kingshighway entrance. But enough of that, the reason we’re talking about my favorite city park today, is because Schlafly Beer announced the release of Park Lager, a new beer to benefit and celebrate Tower Grove Park, the public park and arboretum in St. Louis.

So, just how do you create a beer to represent and honor, a park?

“Our brewing team had the opportunity to sit down with the horticulture and forestry teams in June to brainstorm the beer,” said Lead Brewer Jared Williamson. “One big takeaway was how approachable and welcoming the park is – it’s a space for everyone. We wanted the beer to reflect that as well.”

To the team a lager made sense as that’s what they would want to drink after a day outside. Since Saint Louis is home to the American Lager, they took inspiration from that for the various grains in the beer.

“We added a touch of honey malt for sweetness and character as well as a nod to the new Tower Grove Park beekeeping and honey program,” said Williamson. “For the hops, we include Chinook to bring a bit of woody/piney notes to reference the park’s trees and Hallertau Blanc hops for an aromatic floral component like the flowers in the park.”

The balanced, smooth and crisp beer is an easy drinking offering with the same thoughtful nods to Tower Grove Park reflected in the packaging. Lead Designer Sarah Frost explains, “We spent a morning scouting different landmarks that we wanted to focus on. The labels are meant to transport you to a certain spot in the park. Each label showcases a landmark and its surrounding beauty with plants, trees and greenery. The hope is that customers can enjoy Park Lager near each of the spots depicted on the cans.” 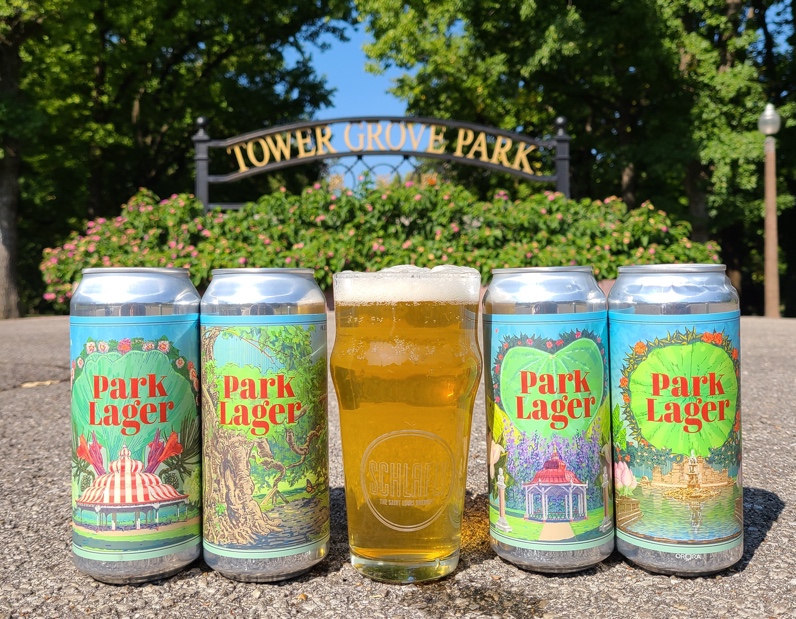 For the team at Tower Grove Park, the partnership aligns two beloved institutions who both strive to make life more fun for the entire community. “We are excited about the new Park Lager beer, and Schlafly’s continued support of our events and membership program. It’s only the start of an exciting partnership for years to come. Tower Grove Park relies on membership dollars to maintain and enhance the park. Members directly support conserving our trees and plants, providing free community events and preserving our historical pavilions,” explains Bill Reininger, Executive Director at Tower Grove Park.

Park Lager is available for $7.99 in four-pack, 16-ounce cans and will be available at select locations in the St. Louis area as well as available for online ordering at the Schlafly brewpubs.

Schlafly Beer offers curbside pick-up at all three of their brewpub locations in downtown St. Louis, Maplewood and St. Charles. To place an online order for pick-up, visit: https://schlaflycurbside.square.site/.

5 new stouts highlight new releases for Schlafly’s 21st Annual Stout & Oyster Festival I love food, especially how it interacts with beer. But one pairing continues to be systemic in its popularity, oysters and […]

It’s time to descend back into the cellar and bring out something special. Of course, I’m referring to the famed Ibex Cellar beneath the historic Schlafly Taproom in downtown St. Louis, where every few months […]

The clock is ticking down to this year’s Hop In The City, Schlafly Beer’s festival to celebrate the art of brewing. This year’s edition of St. Louis’ largest fall beer festival, is set for Saturday, September […]