Has anyone heard of a rattler? When I was working behind the bar as a long-haired college student at the University of Arizona, a rattler was the evil concoction that some folks gave to unsuspecting customers when they became chronically bad in the area of good tipping. The rattler is a half shot of tequila, mixed with a good bar towel squeeze, served mixed in a shot glass. Yes, it happened.

After learning the “Rattler”, I was introduced to the “Snakebite.” Now, this was not a revenge drink, but rather a specific mix of Woodchuck Cider and Bud Light. Now, these days you’ll find a “Snakebite” made with just about any cider and a lager.

Beer mixing is something I enjoyed back in college, but admittedly, it got forgotten until just recently. While attending the recent Schlafly Cabin Fever festival, I was in line for their Imperial Pumpkin when I got to the front of the  line, I asked the gentleman what he felt the difference was between this beer and the regular Pumpkin Stout. He said, Imperial had higher ABV, and that it was actually a mix of the Pumpkin Stout and Schlafly’s Oatmeal Stout. But he wasn’t through talking. He went on to recommend that I take a half pour, and mix it with their Latte Stout for an entirely new experience.

And just like that, all the rattlers, and snakebites came rushing back. Beer mixing was back.

Perhaps the most commonly known  ‘mixed’ beer drink, and possibly the oldest, is a black and tan.  It’s created when a stout and a pale ale or pale lager are mixed in a attractive, two-tiered pour in a single glass.  There are different variations on the style, but the most common is still stout mixed with pale ale or lager.

Another popular mixed beer drink which, technically speaking, also isn’t really a mixed beer drink since it contains only one type of beer, is a Radler (also sometimes called a ‘Shandy’).  This is when you take a Pilsner, Hefeweizen, Wit or other lighter beer and mix it half and half with lemonade or lemon-lime soda.

This light and refreshing combination was first concocted in 1922 by a Bavarian man named Franz Xaver Kugler.  He was hosting a gathering for hikers and cyclists on a hot day in June, when he realized he didn’t have quite enough beer to go around for everyone.  So, he decided to mix what beer he had left with lemon-lime soda to extend the supply.  It was quite popular and Mr. Kugler dubbed his new creation the ‘Radler’ after the cyclists in attendance (radler is the German word for cyclist).

Not all Beer Mixes Are Created Equal

I’m going to start off with the lesson I learned during this exercise to save you some time. Not all beer mixes are created equal. I mean that literally. Start with a smaller pour of your two beers, to figure out the proportions, because not once did a 50/50 split work. You’re going to learn that one beer will dominate, and you need to adjust on your pour.

The hard part if trying to find flavors that would go well together. The fun part is all the drinking you do to figure out if you were right. Using the beer I had on hand, I put together the following mixes. 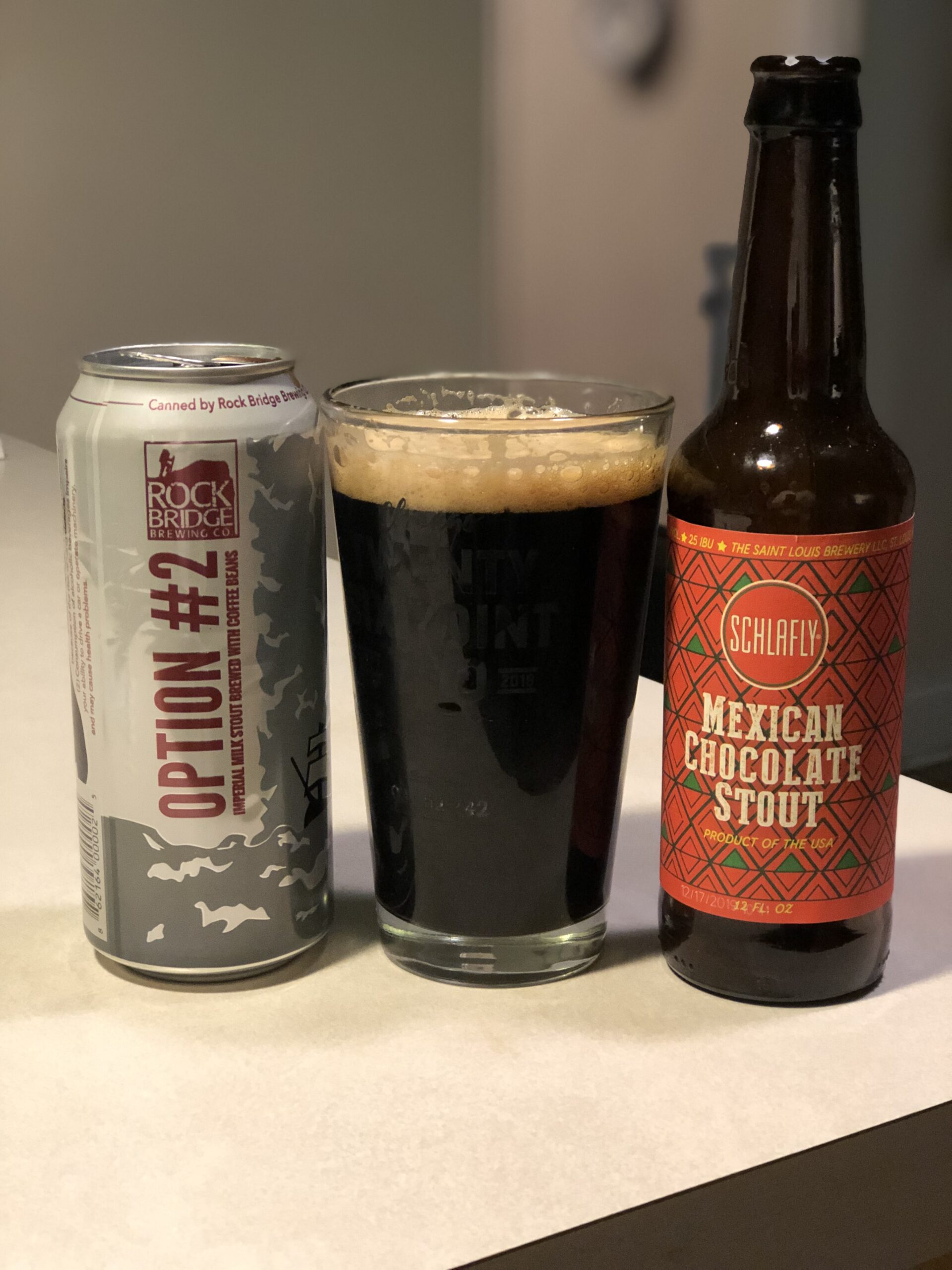 Please make note, I made some serious purchases at the Cabin Fever Festival, so I have a lot of Schlafly on hand.

Option #2 is one of my favorites. An Imperial Milk stout brewed with vanilla-hazelnut coffee beans that pours thick black with a tan head.

Mexican Chocolate Stout has been a staple of the Stout Bout box set the last two years, and I love its light spice.

I was thinking of the vanilla, chocolate, spicey combo here, and I think it went well. The chocolate dominated, but on the second pour, I adjusted and that allowed the vanilla to balance out. 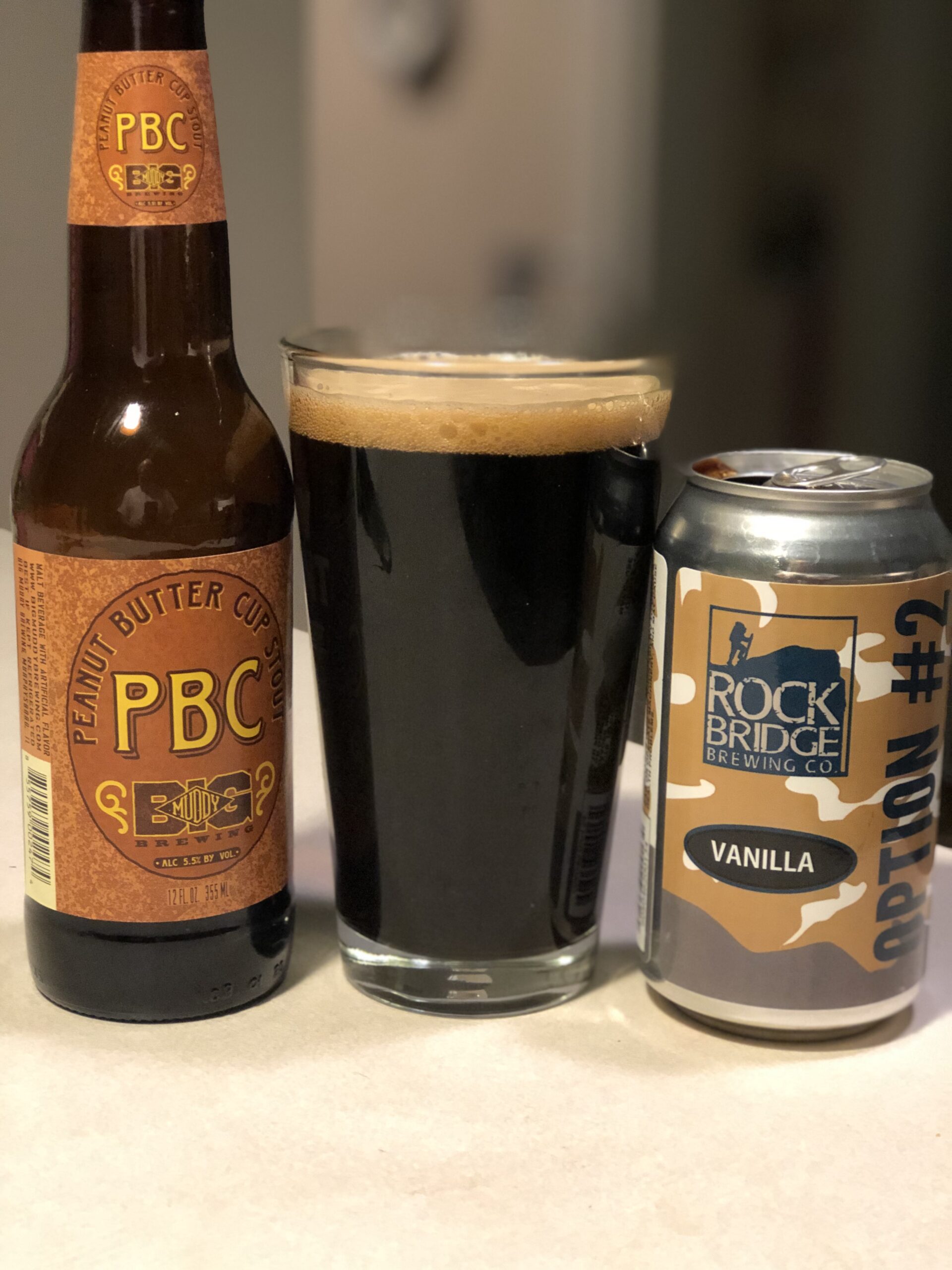 This Big Muddy Beer was my top pick from the recent Wolpertinger Festival at Urban Chestnut. On its own, it’s rich and thick and pours as a glass of peanut butter heaven.

A variant of Option #2, this smooth imperial stout cut right through the peanut butter, and made it very shake like. On the second pour, I leaned more to the vanilla, and it blended just right.

Frankly, this mix of peanut butter and vanilla had very little room for failure. I suggest buying enough of both to find your right proportion. Then forget it, and start again. 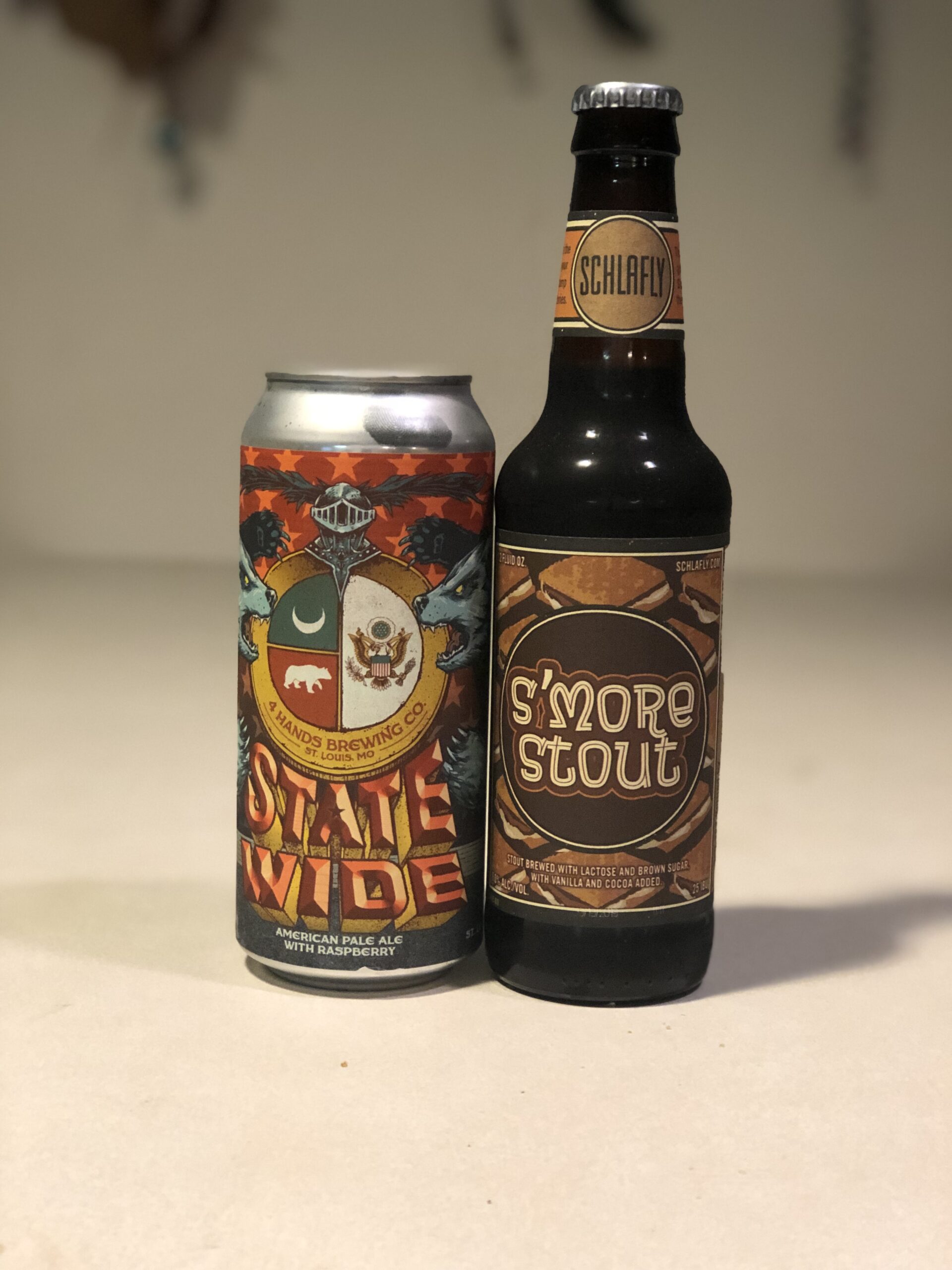 Now here I was trying to bring some fruit into the mix. I remembered that chocolate-covered raspberries are a thing, so that was the goal.

S’more Stout gives you a bit of vanilla, a bit chocolate, but both are pretty mellow.

This one as a lesson in balance. Those raspberries overpowered the stout, so I ended up with nearly a 3/4 pour of S’more to 1/4 pour of Statewide, till I finally found the right balance. And right it was. 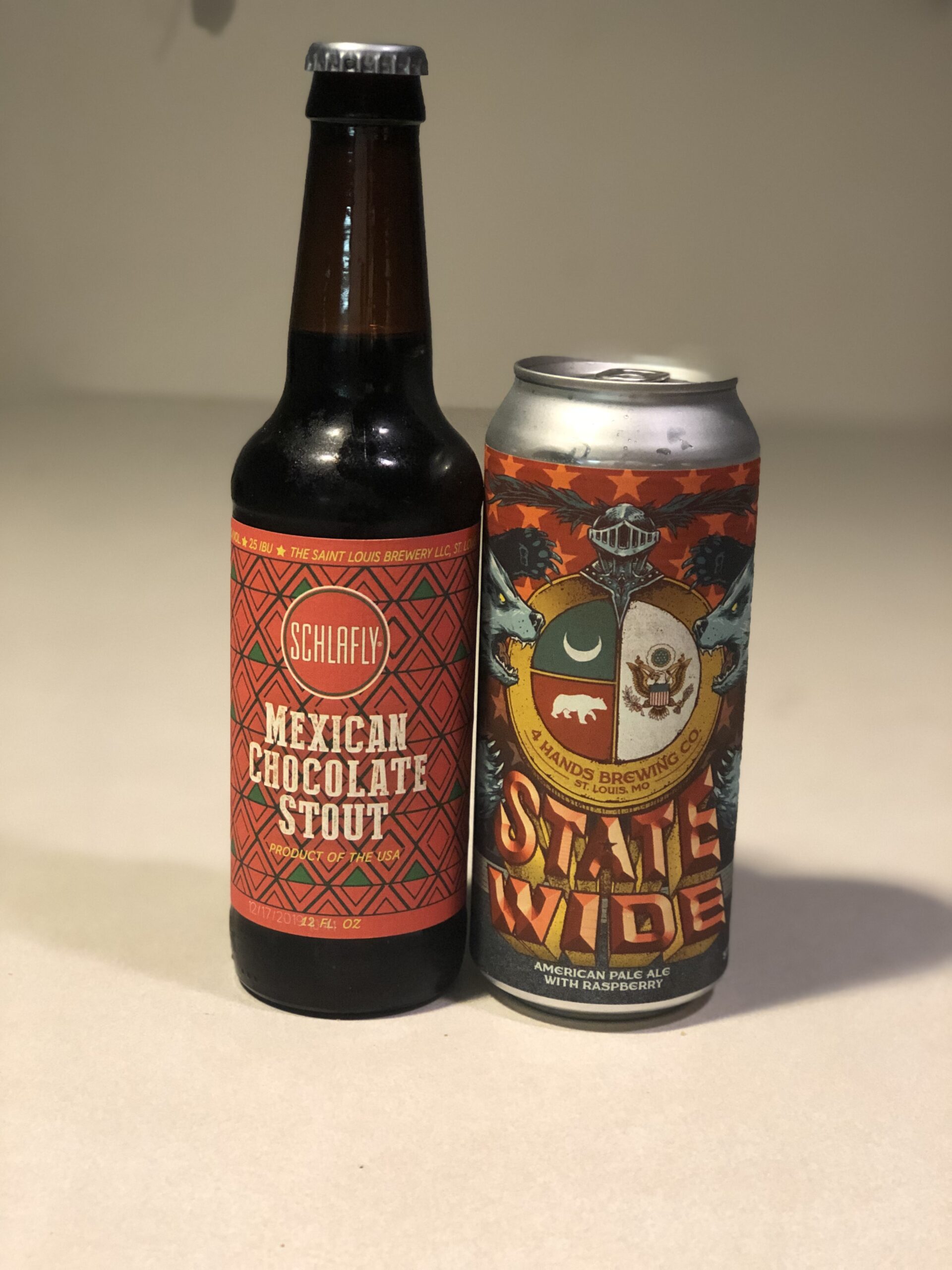 Now, this was the combo that I would bottle if I could.  That powerful raspberry flavor in Statewide is mellowed by the spiciness of the Mexican Chocolate stout. The ratio was nearly 50/50 on this one, so have fun.

I can’t do all the work, but I’m willing to try.  In doing some research for this story, I stumbled upon a style that I have never heard of, Cascadian Dark Ales or CDAs. They are a relatively new take on the classic India Pale Ale or IPA style.

Who first created the style is a subject of much debate, but two of the earliest known examples come from Rouge Brewing out of Oregon and Phillips Brewing out of Victoria BC, Canada.  Rogue’s ‘Skull Splitter’ was brewer John Maier’s take on a ‘black’ version of Rogue’s already popular ‘Brutal Bitter IPA’ and Phillips’ Black Tongue was brewer Matt Phillips’ take on the style, which he dubbed an ‘India Dark Ale’.

I will be experimenting by mixing rich, roasty or chocolaty stouts with hoppy IPAs or double IPAs to create a rich and hoppy flavor combination and dark look that CDAs are known for.

Considering the vast number of beer styles available today these are, of course, only a few of the possible combinations.  But I want to hear from you!  What beer mixes have you tried that you found tasty?  Are there combinations I haven’t mentioned here that you believe is worth a try?