In the beer writing biz, one has to think of calories as well as ABV, when consuming so much beer that you want to write about. One strategy is to take advantage of beer flights or beer samplers. This way, I can try more beers in a sitting, getting just enough to get to know the brew, without filling up and turning myself into a drunk mess. 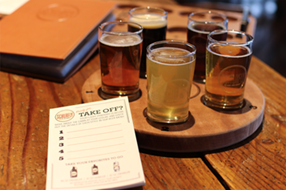 Historically, Schlafly has served a 5 beer flight, but someone clearly believed that five just ain’t enough. 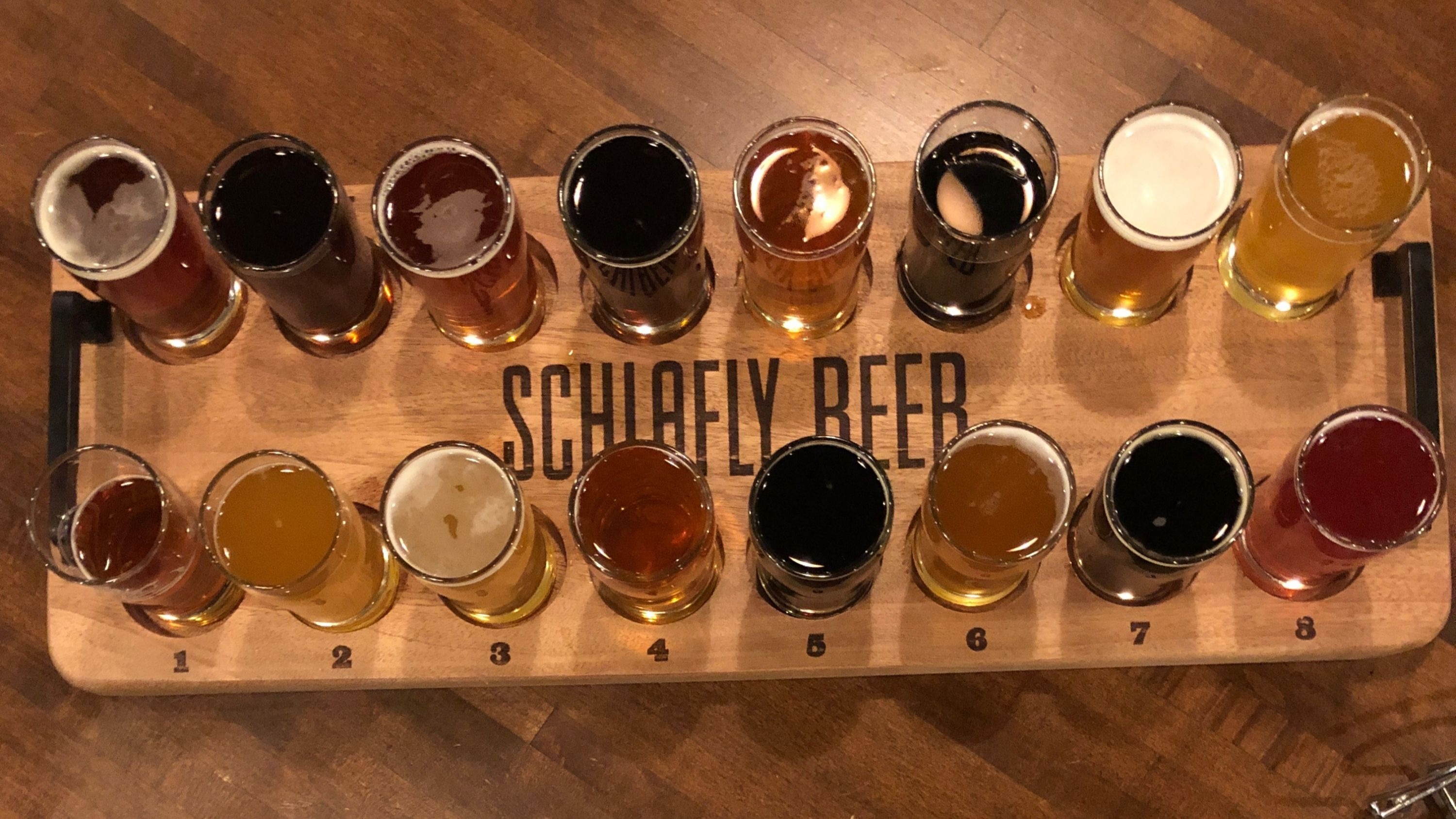 Meet, the Round Trip.

Here you can turn on the autopilot and get a samle of all the varying styles of Schlafly’s menu, in 16 pours. Pretty much everything is represented in one way or another.

On this night, we sampled from:

1. Pale Ale | ABV 4.4% | IBU 25
My first craft beer to memory. A copper-colored, mildly spiced session ale with a bit of fruit and one of the most balanced beers you’ll ever drink, in my opinion.

2. White Lager | ABV 5.5% | IBU 20
My wife’s favorite beer. This lager pours hazy and comes with a bit of orange on the tongue. It’s unfiltered which gives it a bit of sweetness and tartness.

5. Oatmeal Stout | ABV 5.7% | IBU 40
A St. Louis classic if I dare say. A classic stout, with just a hint of the oatmeal to make it stand out. One of the stouts I drink during the summer.

6. Hefeweizen Ale | ABV 4.4%  | IBU16
One of the first styles brewed at Schlafly, but a style I was never a fan of until recently. This winter, in an attempt, to get off stouts, I drank a German Hefeweizen and fell in love. The sample I had reassured me that my palate was now ready for Hefe.

7. Coffee Stout | ABV 5.7% | IBU 30
Another St. Louis favorite. This earthy brew is balanced with just enough coffee and a hint of cocoa on the nose.

8. Proper Cider | ABV 6.8 | IBU NA
Sweet and the sweet again. If you’re a ciderhead, then you should dive in with this one. This is a fruit explosion, but sweet as it comes.

9. Northeast IPA | ABV 8.0% | IBU 35
Schlafly’s entry into the exploding New England IPA market. I fashion myself a bit of connoisseur of this style and allow me to say this one hits the mark. Hazy to a fault, it’s not over juicy but is fruity as you will want.

10. Double Bean Blonde Ale | ABV 6.3% | IBU 25
This was my first introduction to how well coffee can work with beers that are not stouts. As light at this ale is, the coffee is not overdone and is very balanced.

11. Chocolate Session Stout | ABV 4. 5% | IBU 30
As far as stouts go, this is one of the most sessionable you’ll find, and if you like solid chocolate inspired beer you will enjoy this.

12. Ale D’or | ABV 5.9% | IBU 50
This is another Schlafly favorite, and amongst St. Louis soccer fans it’s the beer of choice thanks to a new can offering in partnership with Saint Louis Football Club. As the official craft brewery of the team, the new can comes just in time for the first Saint Louis FC game on March 9, 2019.

13. Scotch Ale | ABV 6.2% | IBU 25
Schlafly’s version of a “Wee Heavy.” True to style, this beer pours dark, mahogany and is rich in caramel on the nose. Not overly sweet, you’ll get a hint of molasses, dried fruit, and toasted malt.

14. Resilience IPA | ABV 6.7% | IBU 70
This is the beer you may have heard about as part of the fundraising effort to support relief efforts for the Camp Fire, the most destructive wildfire in California history. 100% of every dollar you spend goes to the Sierra Nevada Camp Fire Relief Fund.

15. Barrel Aged Barleywine | ABV 10.2% | IBU 40
If you have not gotten into Barleywine, this should be considered a gateway for you. I have a had few myself, and while this one has the punch you will get with a Barleywine, it’s also a bit smoother than most. It’s a big beer, so tread lightly.

Keeping Track
16 beers? You almost need a book just to keep track of what you’re drinking. 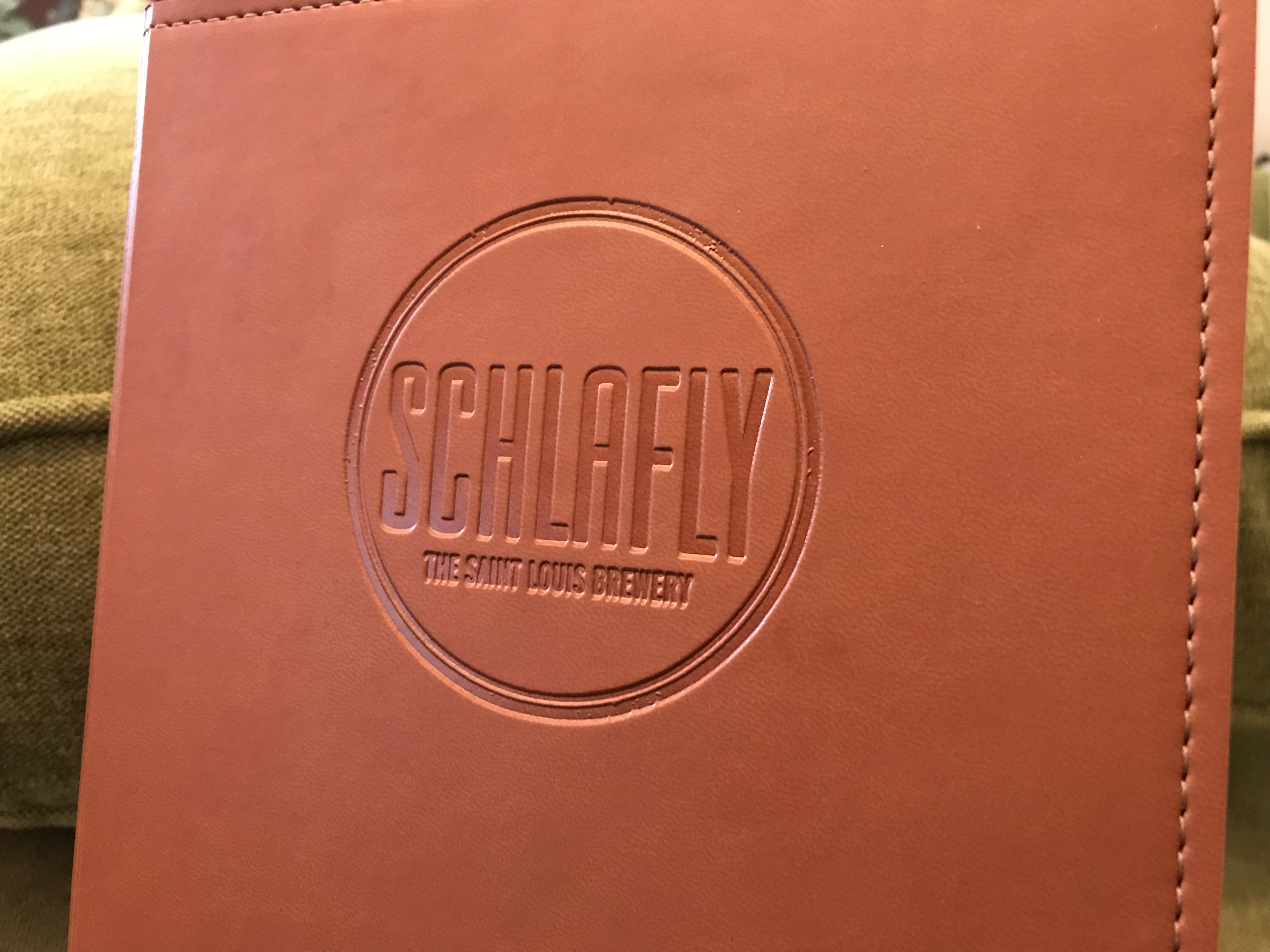 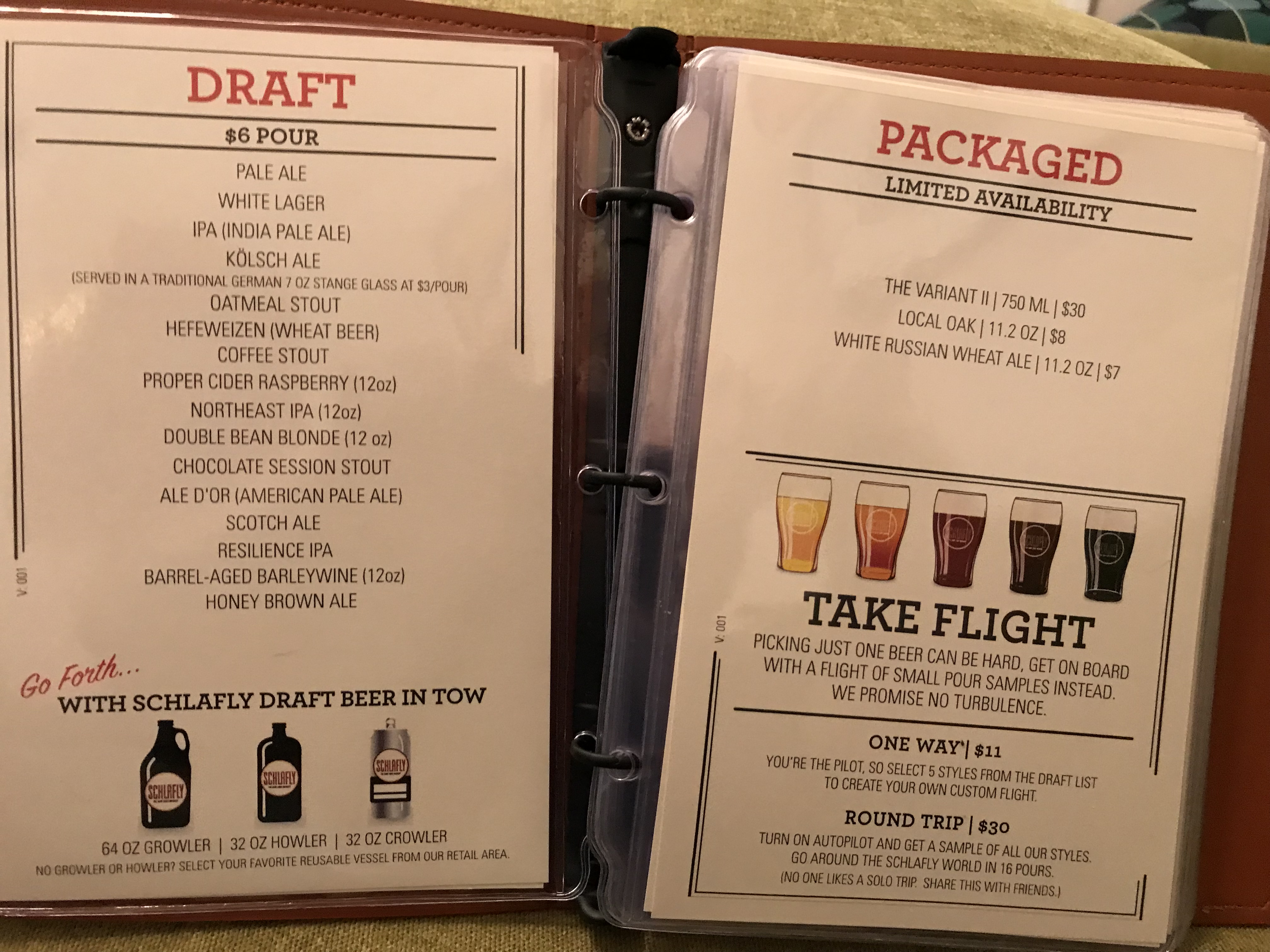 New Menu
Now along with the new flight boards, Schlafly has also redone its menu at the Bottleworks. The new menu features savory snacks such as Pale Ale Beer Bread and Tandoori Roasted Cauliflower; sandwiches such as the Bottleworks Butcher’s Burger and the Grilled Vegetable Muffuletta; and decadent entrees including the Oatmeal Stout Glazed Pork Short Ribs, the Cantonese Noodle Bowl, and the Cajun Meatloaf.

If you’re fan of mixing beers, two iconic beers at that; here’s some news for you. Mixing two iconic beers yields heavenly results I hope this story does not offend anyone. But, beer drinking in […]

Sadly, I’ve never been attended the Great American Beer Festival® (GABF), the country’s preeminent beer festival, and the world’s largest beer competition in Denver, but due to current conditions, I might be able to get […]

Due to the overwhelming amount of snow that fell Friday night and more severe weather on the way, Schlafly decided to postpone Cabin Fever until next Saturday, January 19 from noon to 4 p.m. Time […]