The incredible growth of the St. Louis region’s craft beer scene continues to boggle the mind. So get your boggled mind around this news – Old Bridgeview Brewing has arrived.

At the helm of this newest brewing enterprise are owners Tony Willson, Maria Willson, Eric Earls and Fair Holschen. The four met at a beer festival and soon after began brewing together as members of a beer club based out of New Haven, Missouri.

“All of our best relationships were forged in beer, contracts were signed in beer and our best brainstorming was beer-based,” said Earls. “Tony and his wife Maria met, fell in love and got married.  Beer was involved in all of those events.  We have talked extensively about women in beer.  Maria brews but Fair rarely drinks and does not care for beer.  But as we continued to create recipes that were malt and sweet forward, we found that we could cater to all non-beer drinkers.  We started bringing beer to festivals and found that we had something for everyone to enjoy.”

They are using a 2 barrel system with multiple fermenters but are brewing larger batches of beer with Dave Johnson over at  Missouri Beer Company. Their initial goal is to create small batches of “one of a kind” beers and rotate them often.

“We love beer,” said Earls. “We love drinking beer, talking about beer and especially helping others create beer.  The design of our brewery and taproom fosters collaboration.  We want to brew while we are open and allow our customers to be part of the process.  We are open to suggestions and we love questions.  Our small system allows us to ask our customers what they want, and create it for them.”

A co-op brewery in Missouri?

Old Bridgeview is the first cooperative brewery in Missouri. A co-op brewery is an autonomous association of people who voluntarily cooperate for their mutual social, economic, and cultural benefit. In this case that mutual benefit is beer.

“We have hand-selected 5 home brewers and have invited them to brew with us,” Tony Willison. “These brewers will have the opportunity to brew their favorite beer recipes and each brewer will have a tap available for their beers.

Willson and the team will work with all 5 brewers at every step, but the beer remains the work of each brewer.

The Story Behind The Name

The original name of the brewery was to be Old Bridge Brewing, but a check on federal trademarks revealed there was an application already under consideration. To avoid any future conflict the team switched to Old Bridgeview Brewing. The name Old Bridgeview comes from the view out of their tasting room seating area, which has a view of where the old Hwy 47 Bridge was located. Now they have a view of the new Hwy 47 Bridge.

The answer to the question, “what beers do you plan to brew,” was simple and honest. “All of them, once, and if people like them, twice,” said Earls.

The team is into traditional styles, but they say they’ll do them with flare.

“We read blogs about beer and are chasing new trends and want to always have a beer for everyone. Look for a Kolsch, Pilsner, Blonde, or Saison on tap for lighter beer drinkers but we will also have Stouts, Porters, Browns, and Reds as well.  Of course, people still ask for the Pale Ales and IPA/s so we will have them too,” said Earls.

The brewery opened with a beer menu that does indeed have something for everyone.

The Taproom, the Taps, And The Beer 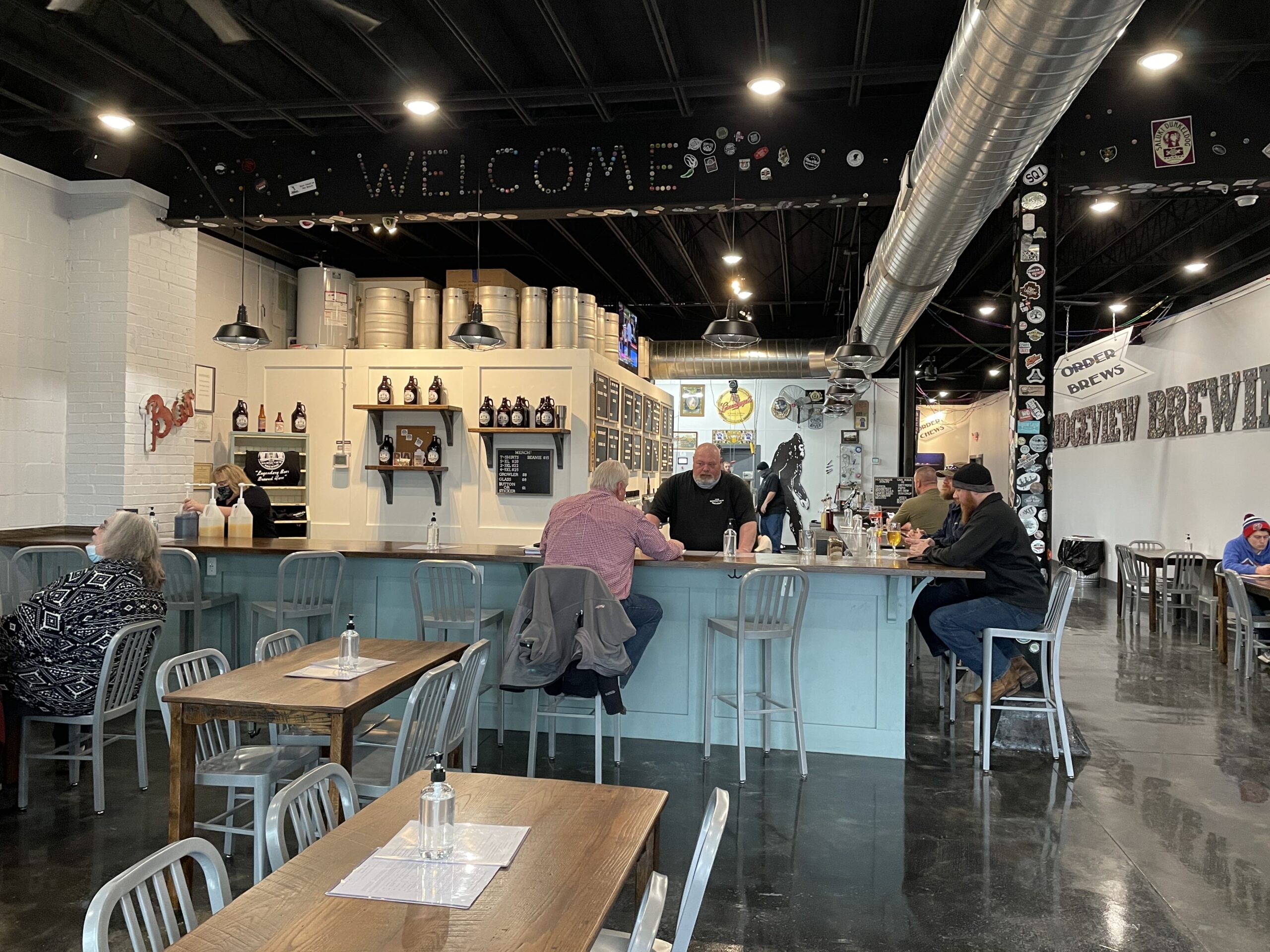 The moment I walked in, there was just something about this taproom that I loved. Small, simple, but it is very inviting, and you can see everything, including the active brewing area. The on-tap board is large, easy to read, and offers you the choice of ordering by name or number. I would love to see ABV added, but you can find that on the menu’s provided on all tables. 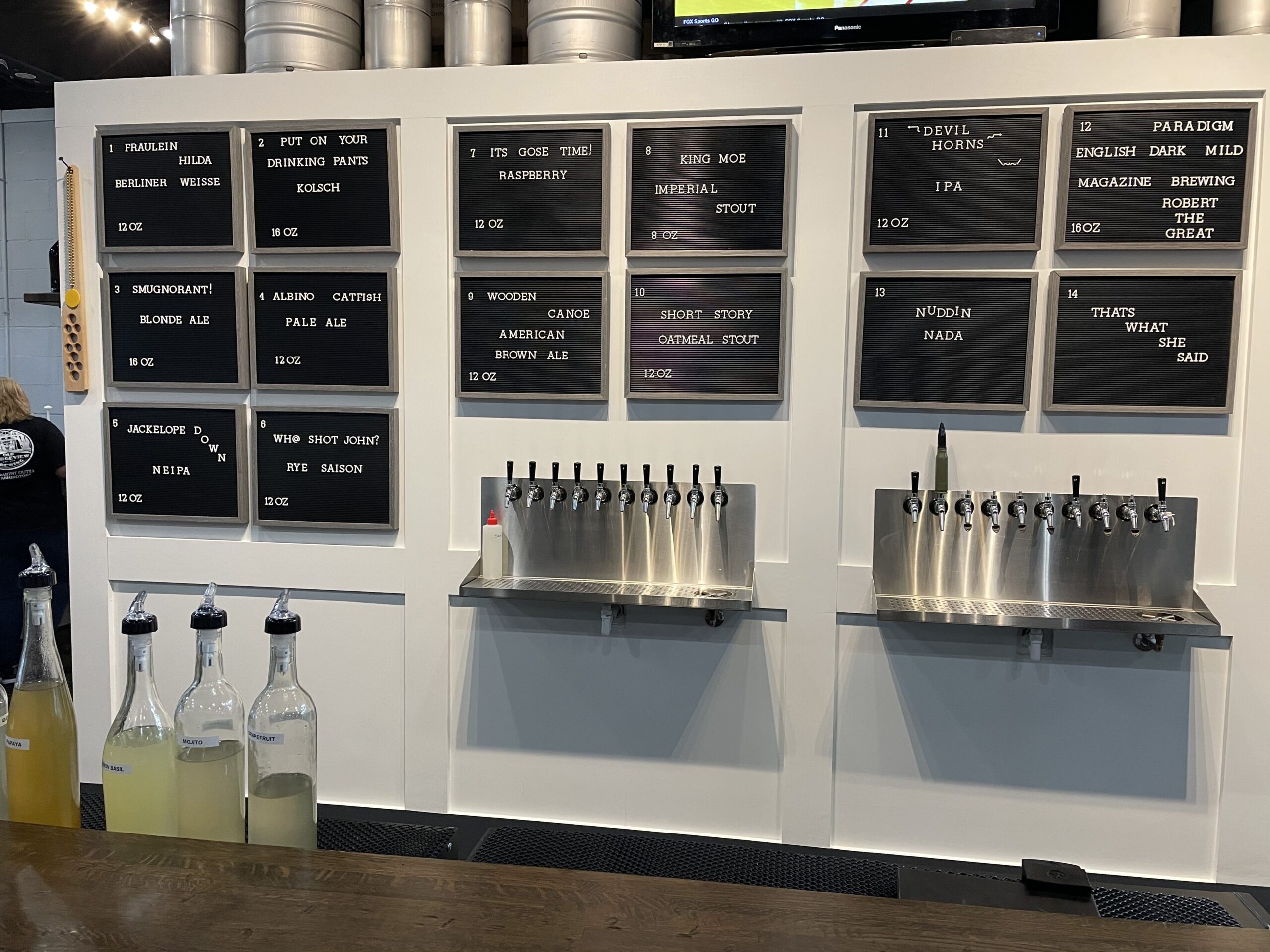 I began with the Albino Catfish (5.8% ABV / 27 IBU), an American Pale Ale. This APA is among the more unique I’ve had. It’s brewed with rye malt, which makes for a most interesting flavor. The Chinook and Amarillo give this beer a nice spice on top of the present rye. 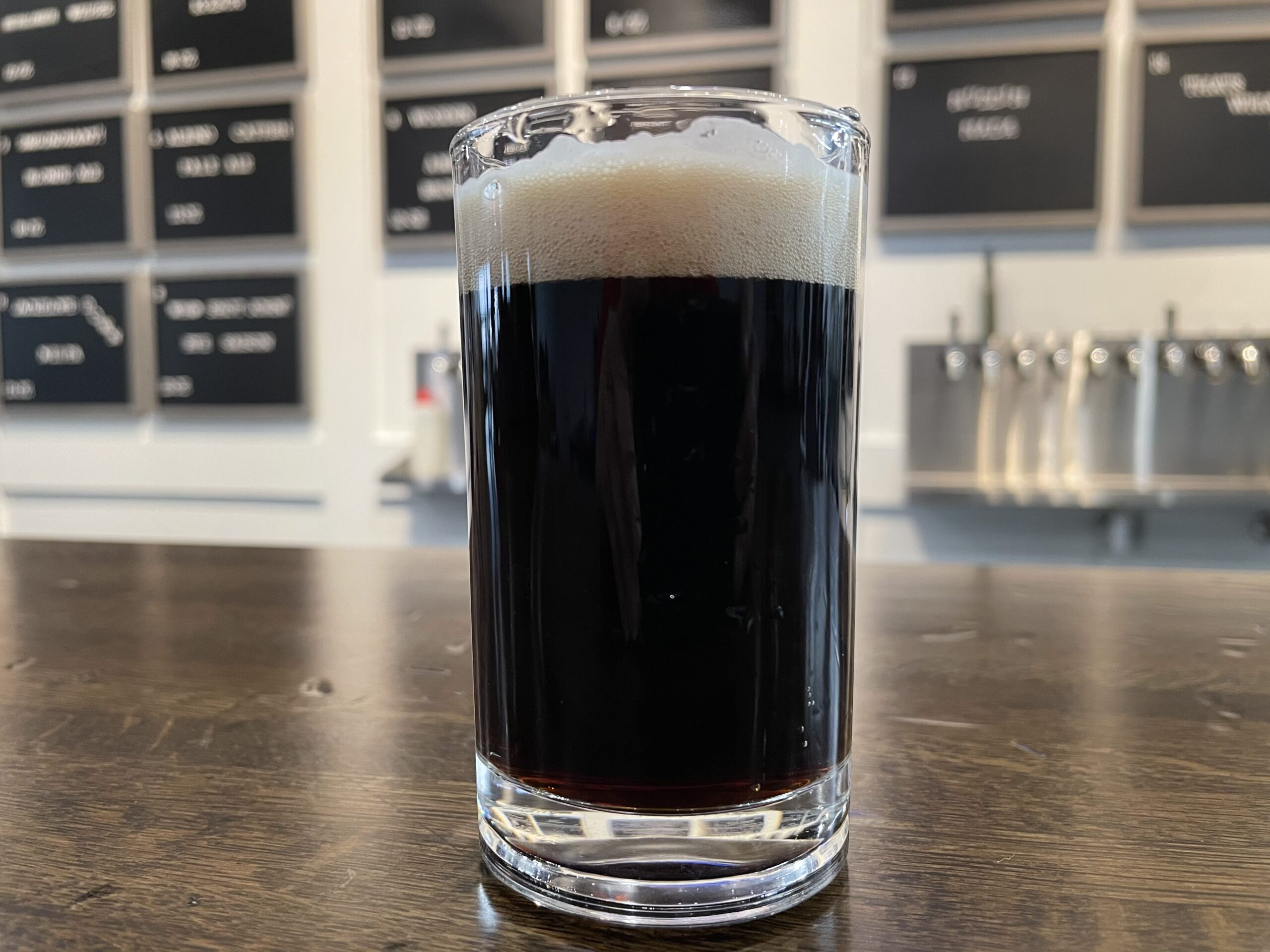 Next, I went with one of my favorite styles, an American Brown Ale. Wooden Canoe (5.2%ABV / 25 IBU) poured jet black, unlike other Brown’s I’ve had. This beer is malty and finds a nice balance at the end of the sip. My bias towards this style had my brain asking for some chocolate hints, but not all American Brown Ales are made that way. 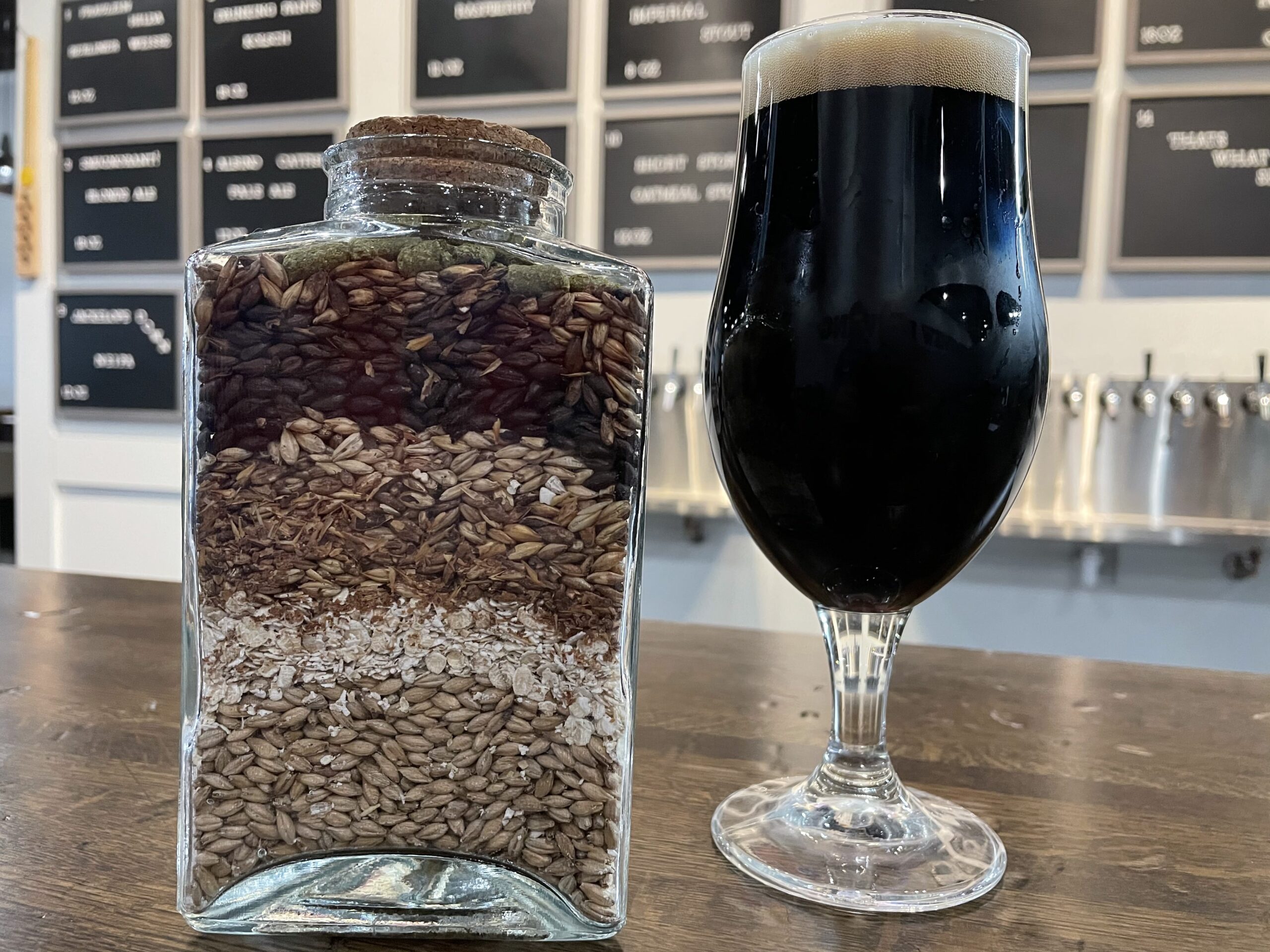 Ah, the beer of the day was Short Story, an Oatmeal Stout (5.5%ABV / 40 IBU). Wow, this beer blew me away. Brewed with Maris Otter Plain, flake oats, Crystal Malt 60 and Munich, roasted barley, chocolate pale, magnum, and tettnag hops. This beer drinks balanced, with plenty of rich, vibrant flavor, and at 5.5% ABV, it would one I would smash often. 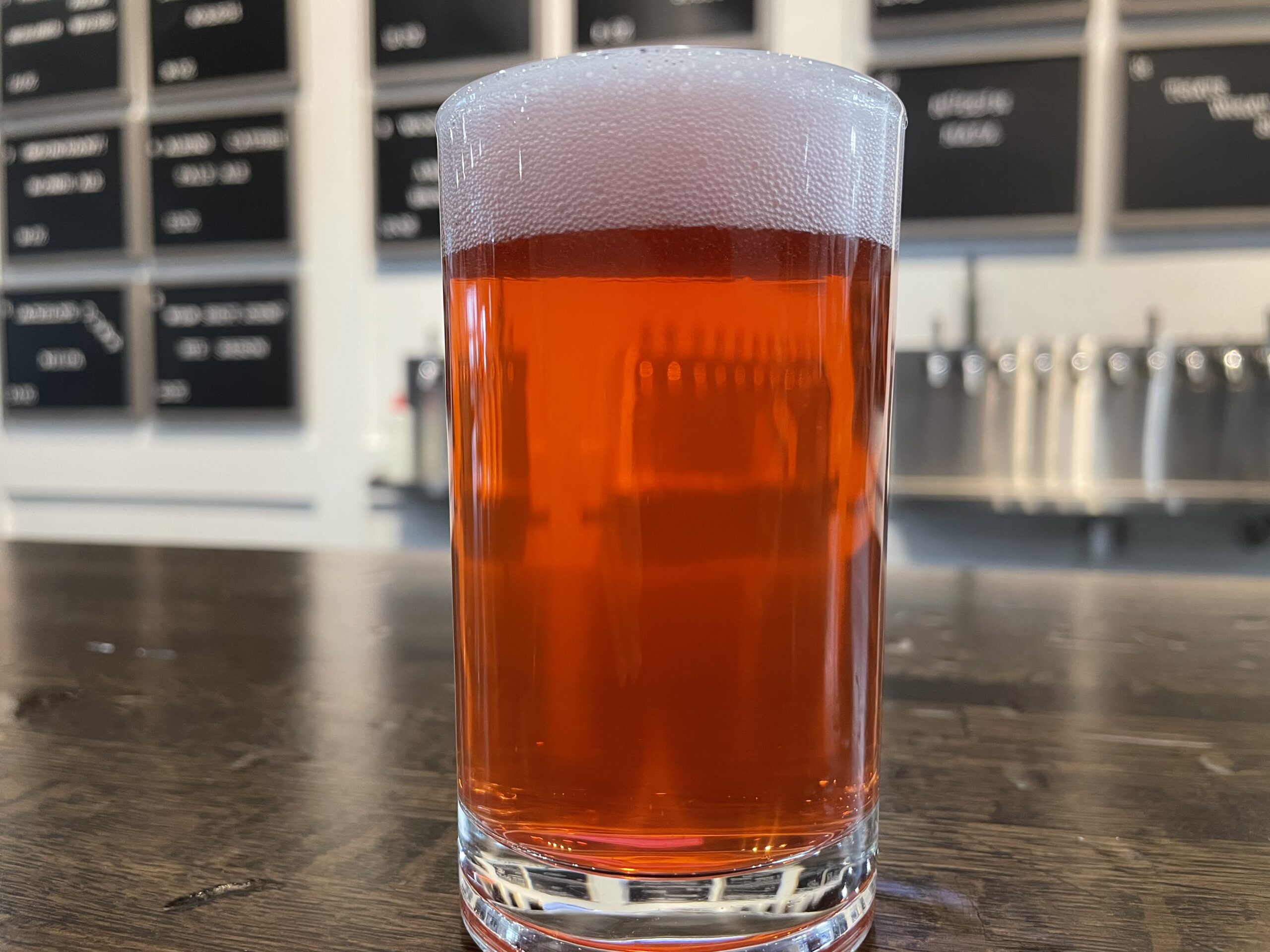 Sours are not for everyone, and I get that, but if you were ever tempted to try and expand your flavor wheel, and bring sours and Gose’ into your world, this beer may your gateway. It’s Gose Time (3.9%ABV) is a delightful kettle sour brewed with sea salt and coriander, but doesn’t drink too sour. Perhaps it’s the 28-pounds of fresh raspberries they added. This will be a great beer for outdoor spring and summer drinking. 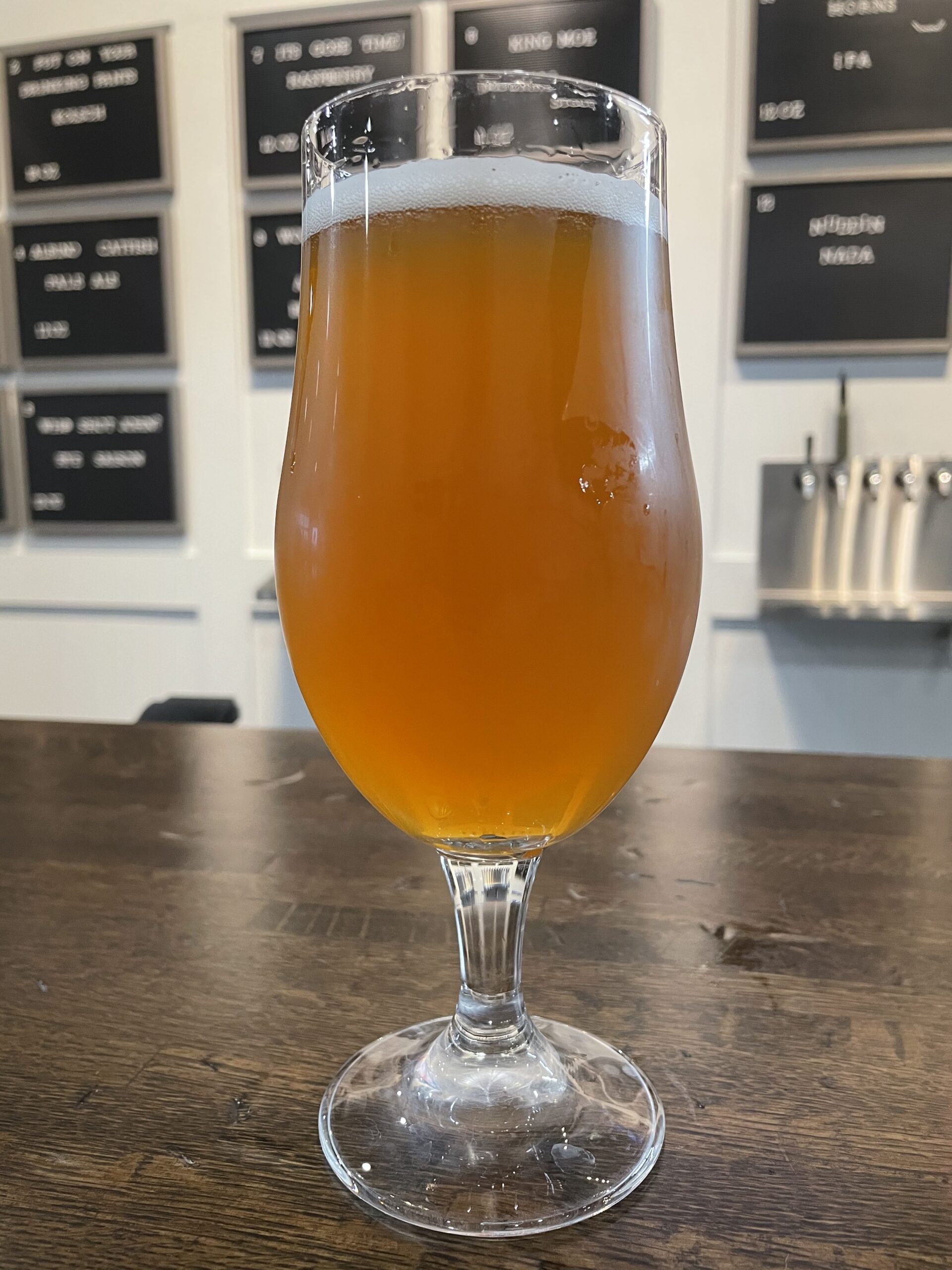 As I like to remind you, dear reader, I am a huge fan of Hazy IPAs. Usually, when I’m at a new brewery, I start with a NEIPA, but for this visit, I treated it as my reward. Jackalope Down (5.8%ABV / 53 IBU) is loaded with hops, Magnum, Cascade, Simcoe, Centennial, and Citra! This drinks with some incredible hop flavor and with pretty potent bitterness. I also got a full-on orange aroma on the nose.

The drinking community, in and around Washington, Missouri is distinguished in its own right, but that said, it is a community that pulls together rather than work independently. The Old Bridgeview team got its start in brewing as a beer club in New Haven, Missouri where they met the likes of Steve Crider from 2nd Shift, Gary Hinegardner of Wood Hat Spirits and Tom Anderson and Ralph Haynes of Pinckney Bend Distillery. So, it was only natural to stay where they know the lay of the land.

“If you have never been in the Historic District of Washington, it is perfect,” said Earls. ” The riverfront is growing and we love the vibe that is happening, They host several community events and have great local participation.  We want to be involved.”

You’ll notice on the main sign, a logo for TS2. This stands of Tilted Skillet, which is a restaurant in Washington. TS2, has set up shop inside the taproom. Near the back, you’ll find an ordering window, but you can also order via an app called Heartland Guest. You can order from your seat, and you’ll receive a text message when your food is ready. The menu is made up of what I’ll describe as bar-comfort food. I had a double Smashburger and a side of waffle fries. The chef didn’t skimp, so let’s just say I would have been fine with a single. My son had the pulled pork sandwich, and he loved it.

According to the legends passed down from beer drinker to beer drinker, somebody somewhere supposedly once called St. Charles County a “craft beer desert.”  Now I don’t know who that person was but if […]

Logboat creates fruity variant to one my favs, SNAPPER now with Pineapple!

Back in April of 2017, I started a new series of stories I call, “Beers I Love,” and I kicked it off with the story about Logboat Brewing’s Snapper. I just love this beer, so […]