In our house we called it the “terrible 2’s” but in Alton, they just call it another reason to party.  The brewery that put Alton on the local brewing map is turning two and they’re inviting us all to the party.

To mark the occasion, Old Bakery Brewing has announced the return of its annual Black & Blues festival on Sunday, March 12 from 1 PM – 5 PM.  Tickets are $30 in advance or $35 day of and include a commemorative glass, beer tastings from over 25 local breweries, and a general good time!

Funky Brew will be spinning old school blues, soul, & funk all afternoon, and there will be BBQ available for purchase. 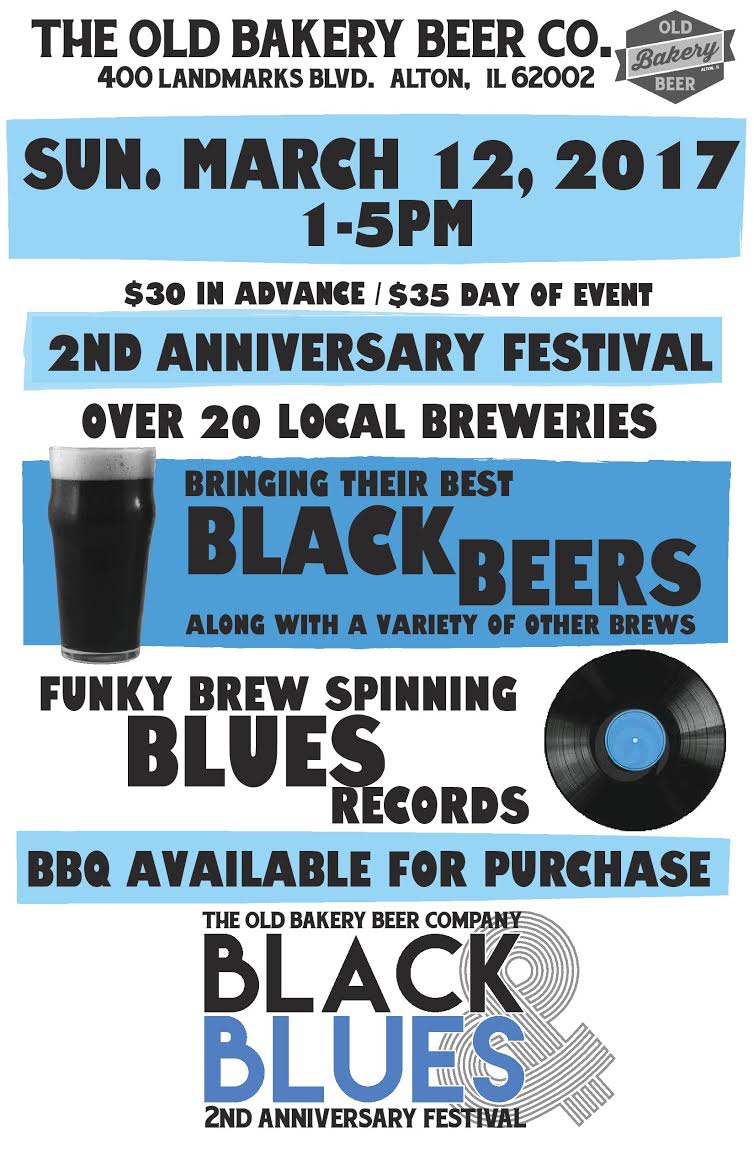 As they did last year, Old Bakery will debut a new beer: 2nd Anniversary Port Barrel-Aged Imperial Stout.  This stout is aged in Tawny Port Barrels from Mount Pleasant Winery.  The unaged version of this beer will also be available to sample for comparison, and a limited amount of the Imperial Stout aged in a Cabernet Barrel will be offered.

2nd Anniversary Stout is a heavy beer, ringing in at 9% ABV and with an IBU of 50.

The partnership with Augusta, Missouri’s Mount Pleasant Winery came together after the two were introduced by Old Bakery’s Illinois distributing partner Koerner.  “They came in one day asking asking some technical questions about storage tanks, and we got talking about barrels,” said Pattan.

From there, the two came together to create their new ‘black beer.’

Like any good ‘black beer’ 2nd Anniversary Stout is expected to be smooth, robust and with clean flavors.
“It’s easy to go overboard with roasted malts, which add a lot of acidity (think really strong coffee), and can become unpleasant to drink. Building a nice base of specialty malts to compliment the flavors of roasted malts is important,” said Pattan.

Tickets are available now at the brewery and at http://blackandblues2017.brownpapertickets.com

If you’re fan of Schlafly’s IPA, here’s some news for you. The beer is coming out in new sized cans. New cans for Schlafly IPA The brewery is changing up its packaging for the low […]

So where in St. Louis can we try some cask brew?  Well, luckily our friends at 2nd Shift are cask beer fans and have long celebrated the cask. […]