I love food, especially how it interacts with beer.

But one pairing continues to be systemic in its popularity, oysters and stouts.

Why do oysters and stouts go so well together? When you think about it, the pairing of the two doesn’t seem so likely, but according to the Pangea Shellfish Company out of Boston, their going together makes perfect sense.

Stout is typically a dark beer with chocolate, coffee and caramel aromas, with a slight bitter and mineral finish. Brewed with heavily roasted malt, this viscous beer can be a meal within itself. More stereotypical oyster pairings tend to include dryer white wines, champagne or a pilsner, but the oyster and stout pairing is an even better match.

Tongue Mapping Is The Secret

The balance of any mouthful is a play on the five tastes; sweet, salty, sour, bitter, and umami.

These tastes play off one another to create various levels of enjoyment from palate to palate, and explain various reasons for why we eat the way we do. For instance, a hot cup of black coffee has nutty and roasted aromas, and can be bitter and sour. Some people like this flavor, so they drink it black.

Others may find it too harsh, so they will lessen the bitter with sugar and mute the sour and the rest of the bitterness with cream or milk.

Now, apply this concept to our stout and oyster pairing and we can see why it works. The sharp bite of brine in an oyster and the toasty chocolate of the stout will pop. The sweetness in the oyster will then, in return, lessen the bitter finish of the beer, leaving behind the creamy texture that any good stout should have.

Now, let’s put the theory to the test 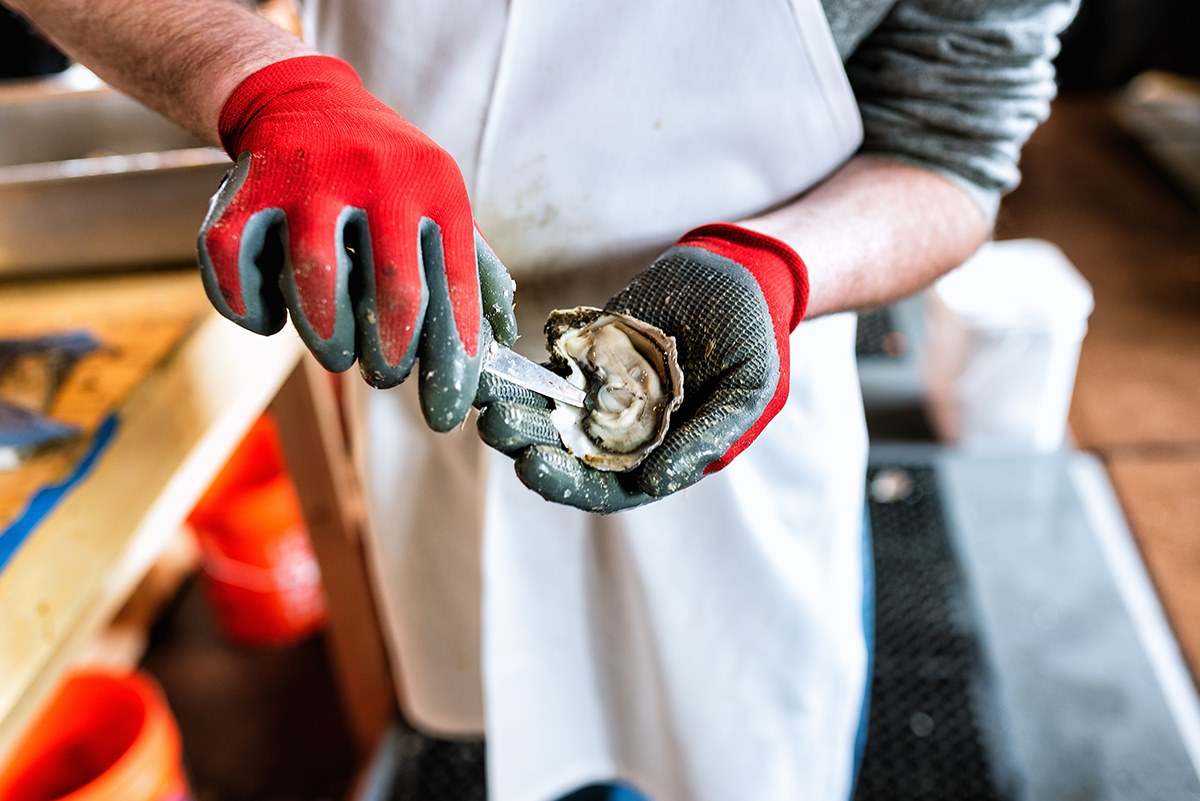 The is the largest festival of its kind in the Midwest, with over 80,000 oysters flown in overnight from both coasts. Schlafly even works directly with many of the oyster farmers who also attend the festival as the “star shuckers.”

In total, 25 shuckers from around the country and Canada will be on-site to shuck oysters all weekend long. This year, Schlafly will feature more than 15 stouts, some exclusively for the festival, with several flavors paying homage to St. Louis.

Return Of The Stout Sampler

Another Stout, I’m really excited to try is called the fiery Tabasco Stout, which of course is the condiment of choice when creating the perfect side sauce for oysters.

Schlafly will also offer a special Oyster Stout that is brewed and canned in celebration of the 2020 Stout & Oyster Festival. This year’s Oyster Stout can features a “by-the-numbers” label with an image of the United States with the miles logged for the oysters to reach their destination at the Schlafly Tap Room as well as additional festival stats.

Three East Coast and three West Coast varieties of raw oysters will be available both inside and outside of the Schlafly Tap Room with raw bars upstairs in the Club Room as well as outside in the “Shuckerdome.”

Fried Oysters, Oysters Rockefeller, Roasted Oysters and Oyster Chowder will be available on the festival grounds as well as the new Pretzel and Brat Kabobs. For those interested in food options outside of oysters, Schlafly Tap Room will also offer their full menu in the restaurant.

Live music and the grand finale of the East Coast vs. West Coast vs. Mid-Coast Shuck Off provides entertainment for attendees. The Shuck Off features three shuckers from each coast (East Coast, West Coast and No Coast) going head-to-head in a relay-style race to shuck, slurp and then chug a stout. The fastest time crowns the winner.

Schlafly’s Cabin Fever Festival is back Time to bundle up and raise a beer in the middle of winter, and hope that the snow stays away this year. Schlafly Beer is once again embracing the […]

Schlafly Beer’s “From the Ibex Cellar” series is one I’ve been following since inception.  My journey began two years ago with a rare tour into the famed Ibex Cellar beneath the historic Taproom in downtown St. […]