The incredible growth of the St. Louis region’s craft beer scene continues to boggle the mind. So get your boggled mind around this news – Old Bridgeview Brewing is on its way.

At the helm of this newest brewing enterprise are owners Tony Willson, Maria Willson, Eric Earls and Fair Holschen are the brewery owners. The four met at a beer festival and soon after began brewing together as members of a beer club based out of New Haven, Missouri.

“All of our best relationships were forged in beer, contracts were signed in beer and our best brainstorming was beer-based,” said Earls. “Tony and his wife Maria met, fell in love and got married.  Beer was involved in all of those events.  We have talked extensively about women in beer.  Maria brews but Fair rarely drinks and does not care for beer.  But as we continued to create recipes that were malt and sweet forward, we found that we could cater to all non-beer drinkers.  We started bringing beer to festivals and found that we had something for everyone to enjoy.

The Story Behind The Name

The original name of the brewery was to be Old Bridge Brewing, but check on federal trademarks revealed there was an application already under consideration. To avoid any future conflict the team switched to Old Bridgeview Brewing. The name Old Bridgeview comes from the view out of their tasting room seating area, which has a view of where the old Hwy 47 Bridge was. Now they have a view of the new Hwy 47 Bridge.

The team will be operating a very small brewery and taproom. They will start with a 2 barrel system with multiple fermenters but will brew large batches of beer with Dave Johnson of Missouri Beer Company. Their initial goal is to create small batches of “one of a kind” beers and rotate them often.
“We love beer,” said Earls. “We love drinking beer, talking about beer and especially helping others create beer.  The design of our brewery and taproom fosters collaboration.  We want to brew while we are open and allow our customers to be part of the process.  We are open to suggestions and we love questions.  Our small system allows us to ask our customers what they want, and create it for them.

A co-op brewery in Missouri?

Old Bridgeview wants to be the first cooperative brewery in Missouri. A co-op brewery is an autonomous association of people who voluntarily cooperate for their mutual social, economic, and cultural benefit. In this case that mutual benefit is beer.

“We have hand-selected three brewers and have invited them to brew with us,” said Earls. These brewers will have the opportunity to brew their favorite beer recipes and each brewer will have a tap available for their beers. There will be a fourth tap reserved which will allow us to rotate with other guest brewers.

“We will help them along the way but it will be their beer,” said Earls. “To do this we will need more equipment, so we have created a loyalty program.  It is kind of like a season pass for beer drinkers.”

The answer to the question, “what beers do you plan to brew,” was simple and honest. “All of them, once, and if people like them, twice,” said Earls.

The team is into traditional styles, but they say they’ll do them with flare.

“We read blogs about beer and are chasing new trends and want to always have a beer for everyone. Look for a Kolsch, Pilsner, Blonde or Saison on tap for lighter beer drinkers but we will also have Stouts, Porters, Browns, and Reds as well.  Of course, people still ask for the Pale Ales and IPA/s so we will have them too,” said Earls.

Put on your Drinking Pants is the Kolsch.  It is a fan favorite and they plan to keep it on draft often.

Fraulein Hilda is a Berliner Weiss.  It will be served with homemade syrups, compliments of Fair.  She has created several syrups and we will rotate those based on the season.

“Our rotating Blonde series will feature everything from a honey blonde to blondes with different late addition hops,” said Earls.

Expect to find a brown or red ale on tap regularly.  Based on the season, they will brew everything from English Browns to Milds to American Browns and Oat Browns.

Expect a stout for all seasons.  They may start with an Irish Stout, but will soon offer Oatmeal Stouts, Porters and big heavy Imperial Stouts.

“We have several popular Saison recipes and plan to introduce them all,” said Earls. “Pale Ales and IPA’s are still popular and we will certainly have them on tap.  May even throw in an NEIPA from time to time.”

Be on the lookout for kettle sour beers like a Gose.

The drinking community, in and around Washington, Missouri is distinguished in its own right, but said, it is a community that pulls together rather than work independently. The Old Bridgeview team got its start in brewing as a beer club in New Haven, Missouri where they met the likes of Steve Crider from 2nd Shift, Gary Hinegardner of Wood Hat Spirits and Tom Anderson and Ralph Haynes of Pinckney Bend Distillery. So, it was only natural to stay where they know the lay of the land.

“If you have never been in the Historic District of Washington, it is perfect,” said Earls. ” The riverfront is growing and we love the vibe that is happening, They host several community events and have great local participation.  We want to be involved.”

As of this writing, no set date has been announced for an opening. The brewery’s social feed is full of announcements regarding the construction as well as the breweries plans. One recent post announced that the brewery is partnering with The Tilted Skillet, arguably one of the finest restaurants in the area. 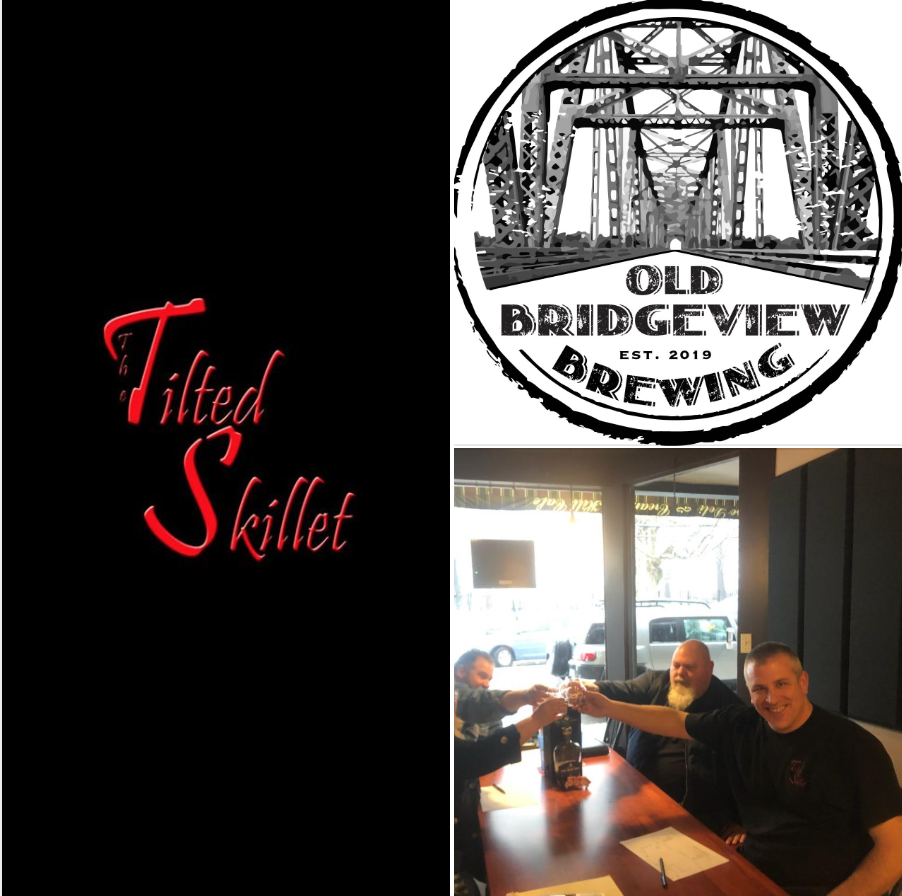 The partnership will provide Old Bridgeview Brewing with a rotating menu that compliments their beer selection.As soon as an opening date is announced, we will spread the word.