This story begins nearly two years ago, back in the summer of 2017. Local brewery Urban Chestnut hosted the National Honey Beer Summitt, and after that UCBC Lab Specialist, Amanda Mikolay got busy. Busy as a bee.

“The year after we first hosted the National Honey Beer Summit – we networked with local city hive groups and sourced our first hives the next year,” said Mikolay.

The hives were originally kept on the roof at the Grove brewery but were moved to a sheltered space between the warehouses on the north side of the brewery, because of the heat.

Harvest season is held in July when the bees are in full swing collecting nectar from the surrounding flowering plants. Harvesting in July is extremely important so that hives can collect more nectar between August through October so they have enough food to last the winter.

A big reason why UCBC chooses to maintain their own hives is not only about production, but also their commitment to sustainability-focused brewing methods. “These intentional measures help us be a better global and local citizen,” said Mikolay. “The hives support our local pollination efforts.  We operate a city garden on-site and support city gardening actively through donations.  Any honey we get from the hives that we don’t use in brewing can be used creatively to support local apiarists and city gardens.”

Aside from her day job at Urban Chestnut, Mikolay is also a proud member of the local Pink Boot Society chapter. The PBS are the female movers and shakers in the beer industry. They own breweries, package the beer, design beers, serve beers, write about beer, and cover just about any aspect of beer, and they are all women.

Recently, Mikolay and the group was approached by the National Honey Board, a federally funded organization that encourages honey for consumer products nationwide, to brew a honey beer.  This opportunity included all the honey they would need for brewing along with $5,000 for additional brewing costs.

“After a discussion with our chapter, we decided to utilize the resources of 2nd Shift Brewing and co-owner Libby Crider, to accomplish this feat,” said Mikolay. “Our goal with this honey beer is to utilize the profits gained from sales to fund a St. Louis scholarship.” 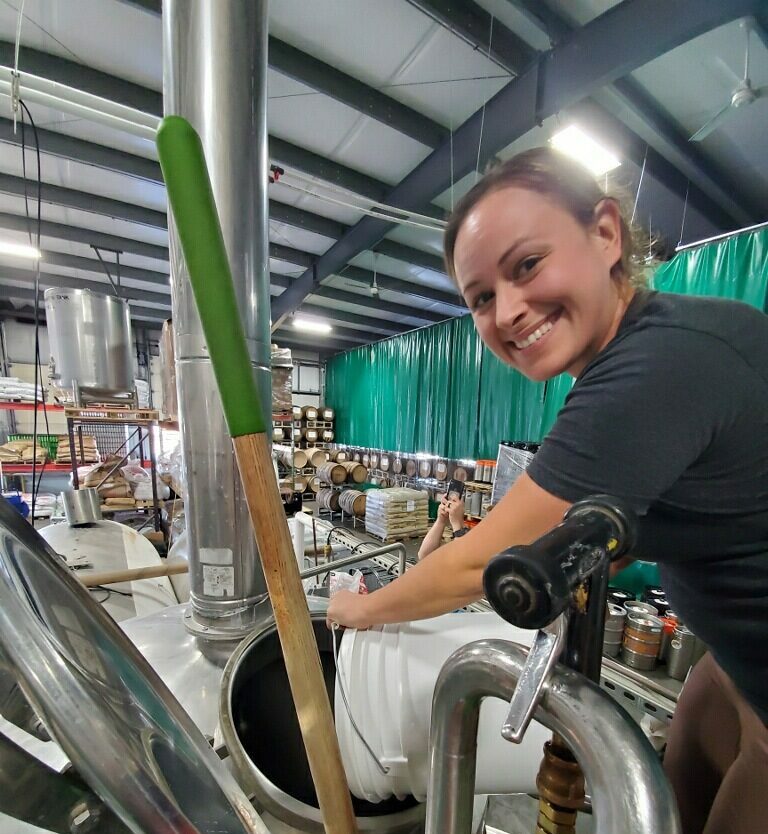 The National Honey Board is using this project to begin a scholarship as well for their National Honey Beer Summit which they hold twice a year (one in Austin around the beginning of May, and the second at the end of August in St. Louis) for the Pink Boots Society.

In early October, the brewing got underway!

“We were able to brew about 250 gallons of an Imperial Stout utilizing melter honey as part of the fermentable sugars,” said Mikolay.

Melter Honey is the byproduct of melting beeswax during the extraction process. During this process, the heat browns the sugar in the honey creating a sort of Maillard reaction. The notes came across as raisin, dark fruit, and a hint of roastiness. These flavors should mesh well as a nice Imperial stout.

In a collaboration beer, the choice of what to actually brew is intriguing. With 2nd Shift volunteering as the brew’s home, it was decided to base this beer off 2nd Shift’s seasonal Cat Spit Spout, but the volume of honey gave them a higher gravity resulting in an imperial stout. Gravity or OG for Original Gravity is a measurement used by brewers to determine the future alcohol content of a beer fermented from a particular wort. The OG on this beer was 22, so it should be at ABV that will keep us all warm this winter.

Now the beer is fermenting, which is the chemical process in the making of beer, wine, and liquor, in which sugars are converted to ethyl alcohol. The process will continue until the end of October and the brewers are shooting for a production (canning) day around the beginning of November with “Honey Holiday” expected to be released around the week of November 4th.
This beer will be for sale at 2nd Shift and various other Pink Boots member’s facilities that will be announced. The money raised from these sales will be going directly towards scholarship opportunities for PBS members. Needless to say, this beer is going to support a bunch of educational opportunities for women in beer.

Earthbound getting soulful with the release of new Chicken & Waffles Blonde

It just seems like yesterday. One of my first articles posted on this blog back in 2015, was about the new brewery in Alton, Illinois. The brewery, Old Bakery Beer Company was unique in that it […]

I was tasked by my national partner Porchdrinking.com to particpate in an on going series of stories, chronicling how spend 2 days / 2 nights in a cities craft beer scene.  With so much to […]

Today is the day. Today is the day when we get to experience beer right from the cask.  According to beer writer William Bostwick, cask beer is served fresh from a wooden barrel, traditionally, or […]