Here is what I found today that every beer and whiskey lover in St. Louis needs to know.

My beer of summer is back

… Leading off with this, because I’m happy to report that my the beer that is so far, “My Beer of Summer” is back. Bluewood Brewing‘s Crush is a New England Style IPA featuring Amarillo, Citra, and Fresh Oranges. If you’re a fan of juicy and hazy beers that are not over-hopped, then this if for you. This beer is balanced mightily, and full of flavor. And it’s a big beer, at 8.1% ABV / 35 IBU, but you’ll think it’s even lower. Now, they’ve added Pineapple Crush. Both will be on sale this weekend, via their online store.

… I recently paid a visit out to Stubborn German Brewing in Waterloo, Illinois. I was hoping to pick up some 4 packs of their Pineapple Lightning War, but they were out. Instead, I picked up the delightful, Social Distancing Pale Ale. And now you can find more Stubborn German beer around southern Illinois, thanks to a news distribution agreement. Right now, Ott’s Tavern and Fish Stand in Millstadt have these cans and Vintage Wine Bar in Waterloo has a keg of Blitzkrieg IPA. We really appreciate their support!

… Growler fever continues to grow, or is it just my imagination. I’ve been noticing that as more and more of us are filling up, there are fewer around. Luckily the etiquette allows for filling of any breweries growler, but it is nice to fill up a growler that has that brewers label on it. Fans of Hopskeller, are in luck as the brewery just received a new shipment of growlers this morning! For all of you who have been waiting to get your hands on a Hopskeller growler, they’re available starting today.

… Yes, it’s true. Strange Donuts and 4 Hands Brewing have made a beer together. This Imperial Oatmeal Stout with vanilla, cacao, and rainbow pony dones is available to order online for curbside pick up. 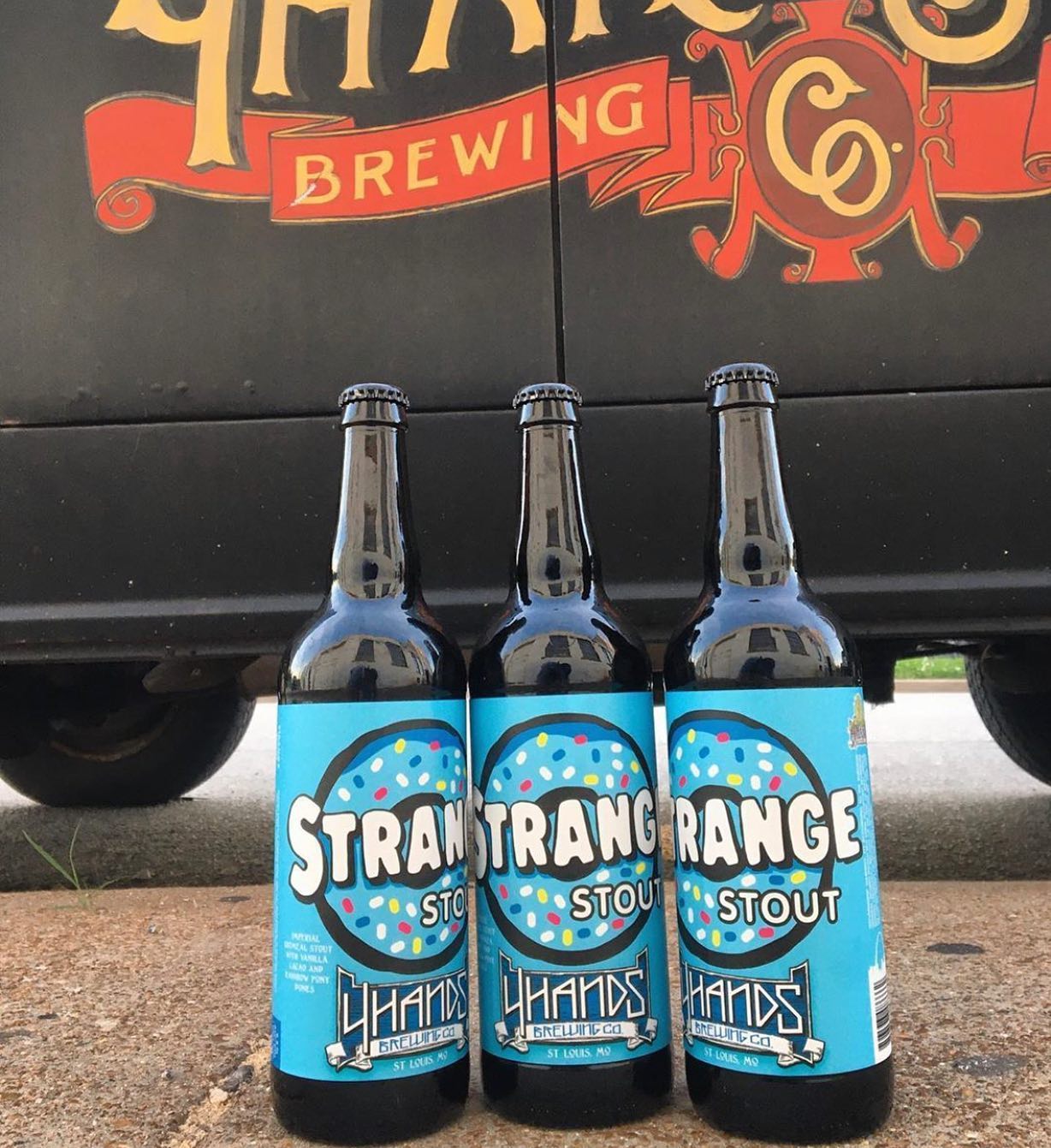 …. You asked for it!!! Recess Brewing‘s base sour wheat ale (formerly known as brainstorm) is back!!! Brainiac is an easy-drinking wheat ale with tons of tartness. It’s refreshing as can be on these hot summer days! They hopped it with huell melon hops for a fruity note as well. Come by today for a pint, 4pack, or a growler to go! Their patio and to-go sales are open

… Every year around this time there’s sightings of the legendary Piasa Pilsner from Excel Brewing! It’s been reported to have been spotted recently at Randall’s in Fairview Heights, Eckert’s in Belleville and Tru Buy in Highland! Don’t let the legend scare you – Piasa Pilsner is lightly hoppy and extremely refreshing. Get your claws on some Piasa Pilsner before it’s too late!

… Recently a fellow Reddit user asked about some of the best liquor stores that featured a good selection of local beers. That reminded me that if even though we want to support our local breweries, we need to think about the locally owned bottle shops as well. Each day, I’ll feature one, with a smattering of what they’re offering and links to their online stores.

… Petrichor Brewing‘s patio is open, and they have limited quantities of Afternoon Delight and Midwest Values in cans. They are  open until midnight

This will only be available on the online store modernbrewery.supportlocalstl.com

That’s all I can find for now. I hope you find this information useful.

What the heck is a Lupulin? It’s a question many St. Louis beer fans began asking in 2012 at the first annual 4 Hands Brewing Company’s Lupulin Carnival. […]

Your STL Six Pack | Best beers to try this week

Drink 314 has joined forces with DrinkMoBeer.com to bring you a new weekly feature we’re calling Your STL 6er, which will feature six local or regional beers that we are recommending you try this week.  Chris, Tim […]

3 breweries to seek out at this year’s St. Louis Brewers Heritage Festival

The 12th Annual St. Louis Brewers Heritage Festival is the premier showcase of the St. Louis beer scene. This festival features over 100 styles of beer from over 50 greater STL area breweries, homebrew club […]