It is officially summer in St. Louis, and now that it has stopped raining, We can actually kick off summer with a look at what will be new on the beer shelves and in the tap rooms this summer.

No matter what summer is to you, from tubing down the river, sitting on a pier or in a boat fishing, or just relaxing on the back patio, the beer you have with you is as important as what you’re doing. There is just something about the beers of summer.

I reached out to a bunch of our local brewers to find out more about what we might expect this summer, and a few got back. Here’s what I can share.

The godfather of St. Louis craft beer, Schlafly Beer has two summer offerings that should make your list. 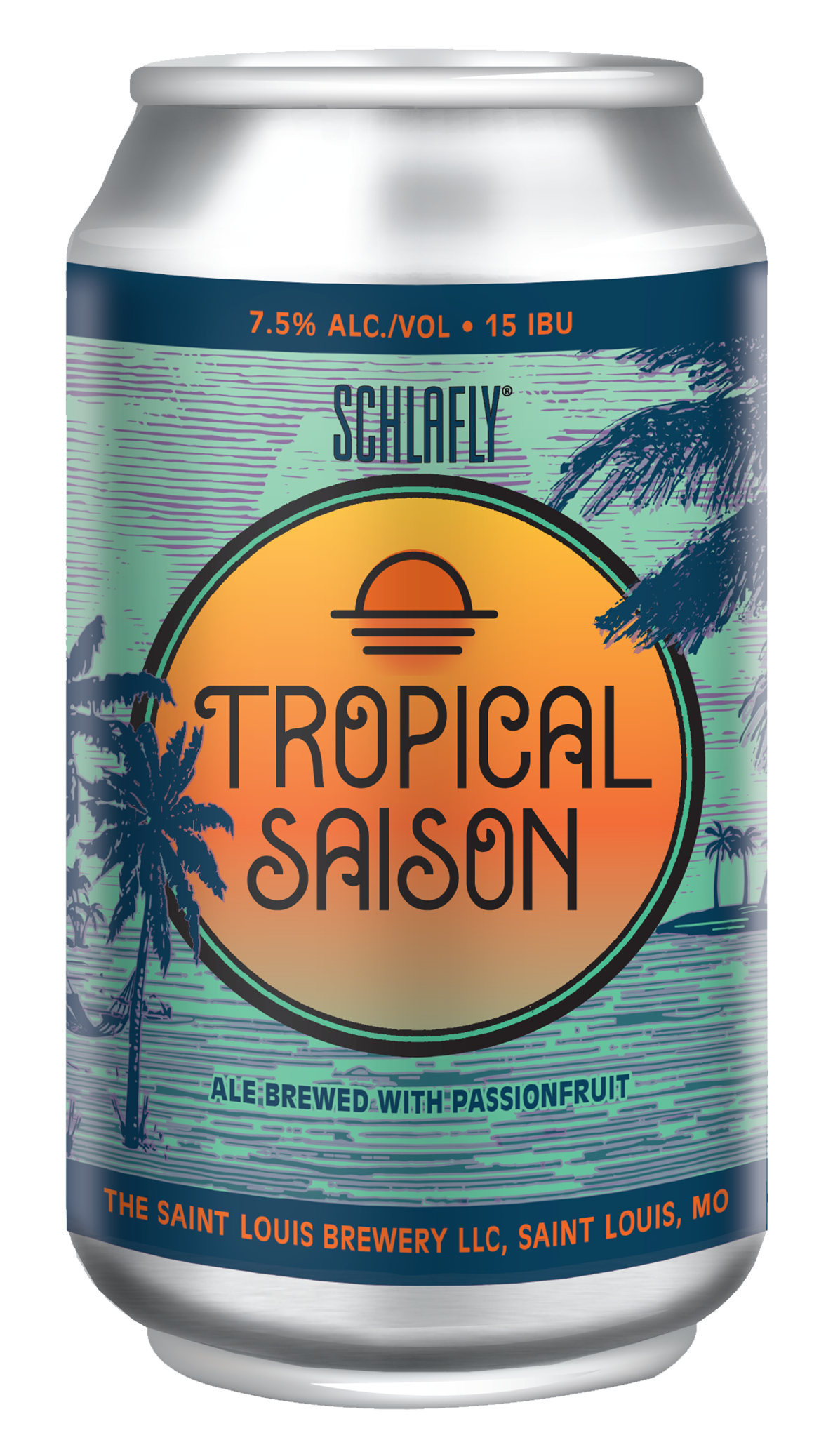 You may recall, several years ago Schlafly released an all fruit beer pack called the Frugi-Four, and in it, debuted Passion Fruit Saison in that pack. It was a clear favorite from the pack and later made the move to previous versions of their Patio Pack. This year they revamped the recipe and gave it a new name: Tropical Saison.

The addition of passion fruit gives it a bright and tart pop of flavor, rounded out by the simple malt body and light barnyard funk from the yeast.

In 2017 Schlafly Lead Brewery Jared Williamson was able to travel to Germany for the hop harvest and walk the fields with the farmers and drink local beers with them. He really fell in love with the Pilsners and especially the Keller Pils style while over there.

“I knew upon returning to STL we’d brew some beers inspired by the trip and use some of the new German hops I experienced both in the fields and at the Hop Research Center in Hüll (Hopfenforschungszentrum Hüll),” said Williamson.

Last year Schlafly debuted Keller Pils with very traditional hops, and this year they’re bringing it back with newer varieties all grown in the Hallertau region in Bavaria, featuring a blend of newer German varieties Callista, Hallertau Amarillo, and Hallertau Cascade. While two of these hops have American heritage, with growing them in Hallertau they take on new almost softer Noble characteristics, which makes them very unique and gives the beer a fresh take on a very old school style.

For Summer beers, 4 Hands is really focusing on expanding the Contact High line for it’s always been our Spring/Summer seasonal and it’s a fun expansion of some fruit-forward brews. They introduced the Contact High Hazy and Radler just weeks ago and recently released their first-ever seltzer. They kicked it off with a Tangerine Seltzer and have been testing two other flavors (pineapple and blueberry lemonade) in the tasting room available in crowlers before they take them to 16oz cans.

So far, the response has been great. These seltzers are a great low calorie and refreshing beverage for these hot summer days. Available in 16oz cans in the market they currently have the 16oz Tangerine Seltzer cans and hope to have the Blueberry Lemonade and Pineapple available in the market within the next month.

Beyond that Passion Fruit Prussia, their Berliner Weiss with passionfruit is always an appropriate pairing for these hot summer days which is currently available. And be on the lookout for Blank Space coming down the line which is a low cal, low abv ale that will be released in the next month or so.

Our cross-state friends at Crane Brewing have been one of my favorites since they started distributing in our area. They focus on three styles, Saison, Berliner Weiss, and Lambic, with the belief that these three styles are the foundations upon which they can place a variety of hops, wild yeast, souring bacteria, wood-aging, spices, fruit, and specialty malt.

Crane has been wanting to brew a Saison variant for a while, and Hibiscus Lemon Saison is it. They are very familiar with Hibiscus as it is the main ingredient in their Tea Weiss they wanted to accentuate more of the floral fruitiness. Plus the addition of lemon zest will make it an awesome summer beer.

It is one of the first Saison variants that will be canned.

Since everything is still touch-and-go with their reopening and what that’ll look like, Hopskeller Brewing Company, located in Waterloo, Illinois is keeping seasonals fairly tentative. That being said, they still have some summer seasonals rolling out. Right now, Spaghetti Western Italian-American Pils (5.25% ABV, 32 IBU) is the go-to summer beer they have right now. This was the first recipe that the assistant brewer, Conner McDonald, came up with on his own — and it’s awesome!

Brewed with lemongrass and basil, and dry-hopped with Northern Brewer, expect a rich aroma of basil, mint, and oregano over the prominent malt profile. A sweet maltiness pervades through the initial flavor, alongside flavors of lemon and basil — the finish is dry and crisp, and the mouthfeel is light enough to bring you back for more. This beer is the perfect beer to go with our pizzas — medium-bodied, crisp, and just herbal enough to be intriguing.

Pairs best with foods you’d associate with an IPA, as well as foods with a distinctly herbal note. Crisp enough to be enjoyed by itself on a hot summer day.

In addition, the crowd-favorite Strawberry Wheat Ale should be ready to go next weekend. This red wheat-based ale features over 200 lbs of strawberry puree and lactose for smoothness. This has been one that Hopskeller made as a seasonal since 2018 and is one that their customers regularly ask about throughout the year.

The first summer release from Earthbound is out now. Out & About dropped last week, just in time for Pride Month.  Danielle, who brewed the beer and spearheaded the release (and is, coincidentally, one of the few gay brewers in town was kind enough to tell us more about this brew.

Out & About was born out of our desire to create a fun & unique beer for Pride month. We basically took the recipe for our Lavender Braggot and jazzed it up a bit. We tested Out & About on the pilot system last year, and it went over well enough that we felt confident in brewing a batch on the 7BBL system this year.

Braggot ales are not a super mainstream style and non-mainstream is kind of Earthbound’s thing. They are just hipsters like that. Also, hibiscus is fun to work with, the scent, flavor and coloring are fabulous.

We thought it would pair nicely with honey and lavender because you get a lot of that floral/sweetness from those ingredients and the hibiscus comes in and balances those flavours out with its cranberry-like tartness. 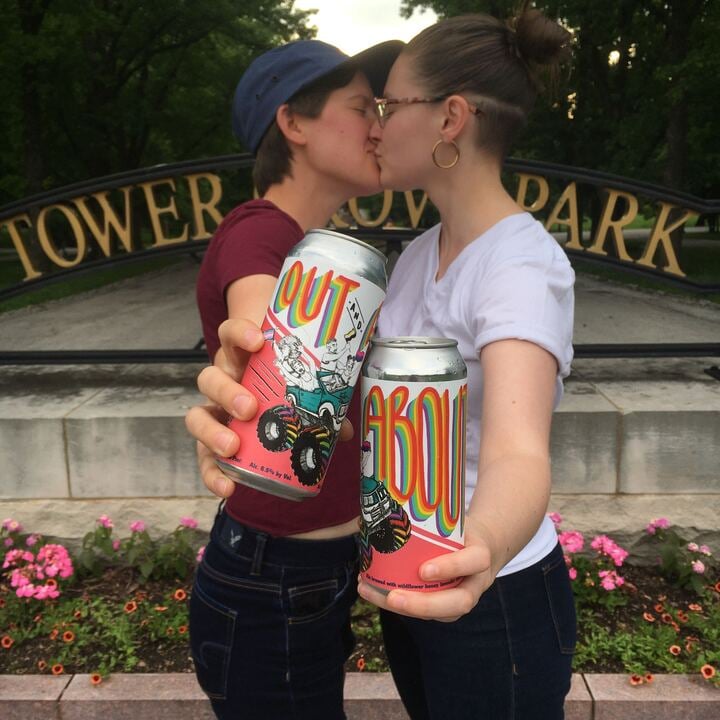 Alpha Brewing is putting out a trio of beers very soon with a three king’s theme, King Tut, T-Rex and Charlemagne.

These three beers will be released in a mixed 6 pack getting two beers of each of the three varieties. 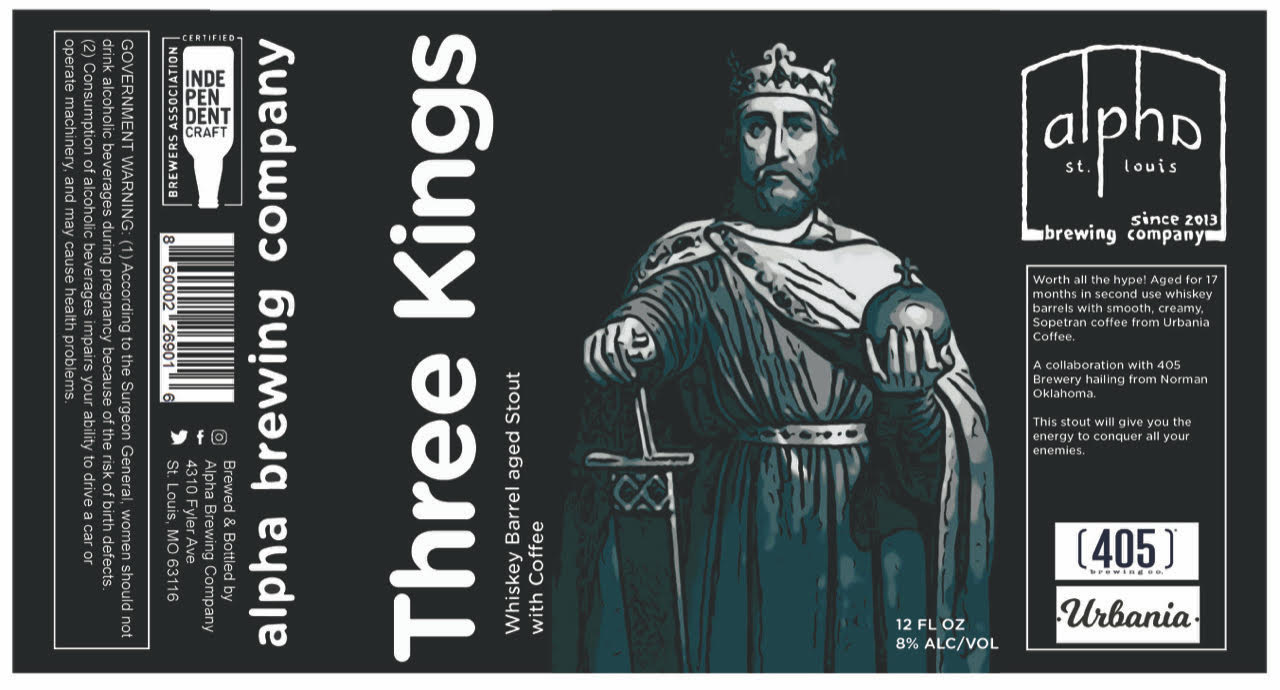 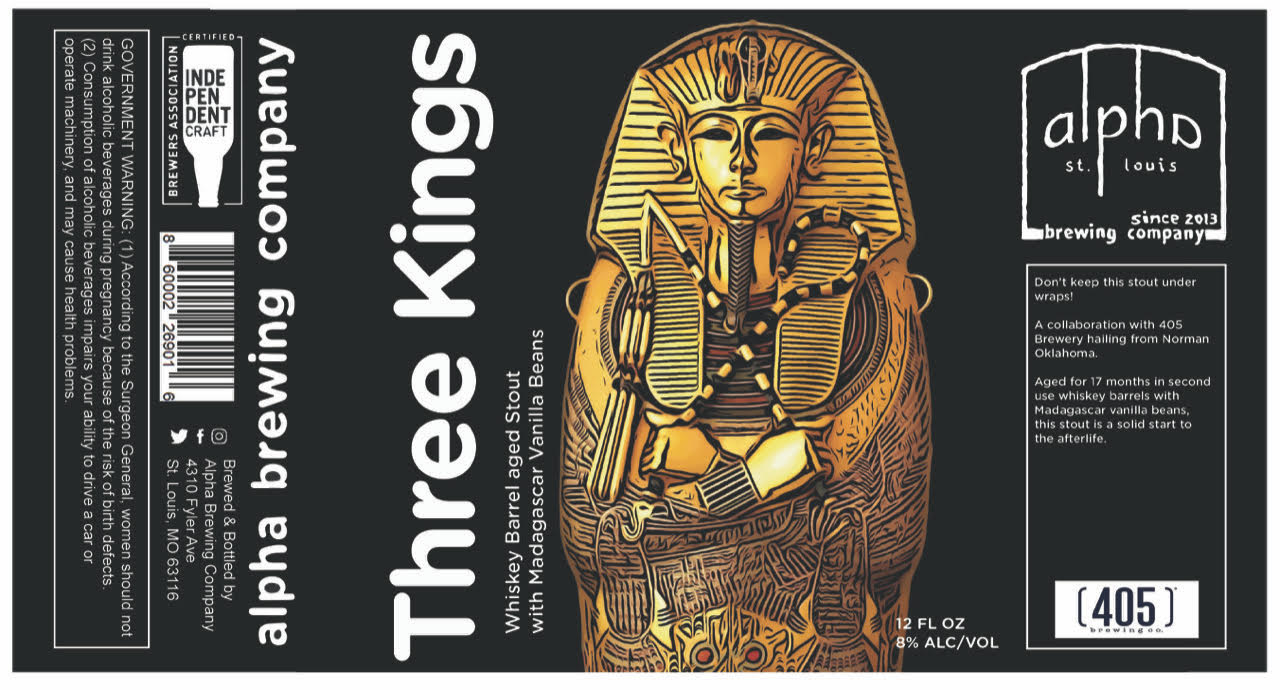 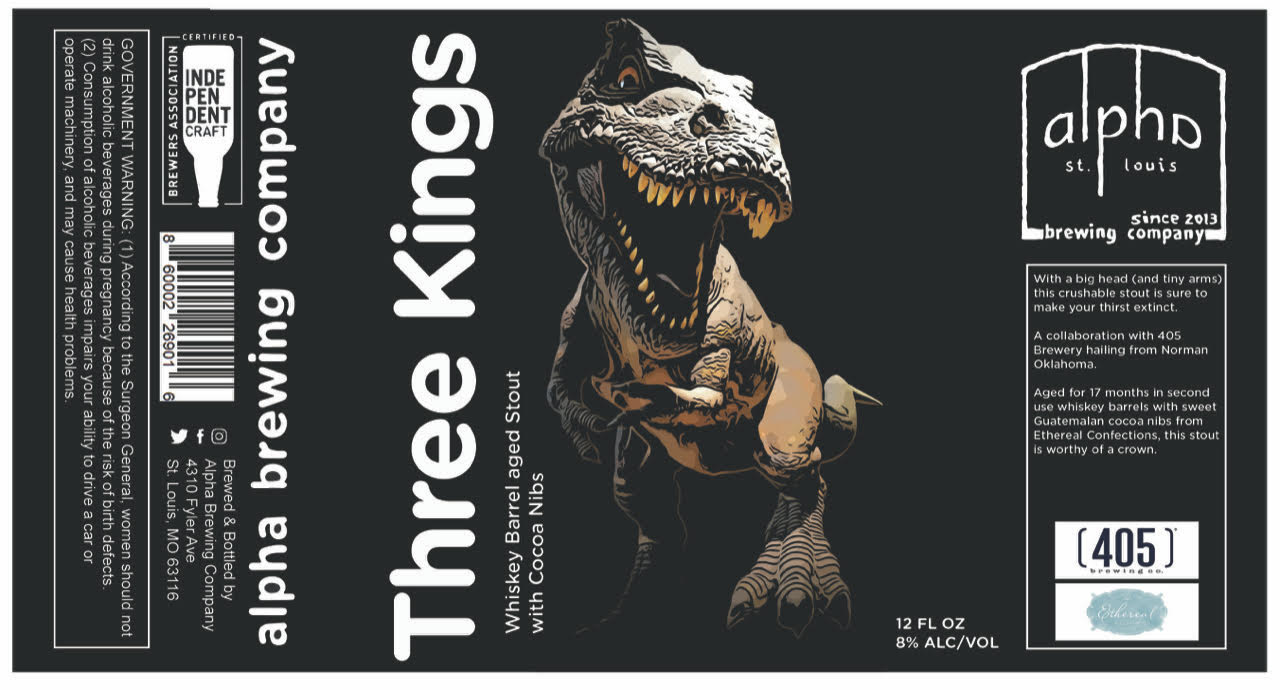 First is Hidden Pool Pilsner. This is their annual summer lager release that is their take in a Czech Pils. It’s bready and well-balanced with some peppery spice to it. The name comes from the pool they found when putting in piping for the brewery. There was a built-in pool under the floor.

Next is Curbside Stand. It is a fruited Imperial Berliner Weisse (6.5% ABV) with blackberries, lemon peel, vanilla, and lactose. Think of it as a blackberry lemonade. Of course, the name comes from two-plus months of doing business via online ordering and curbside pick up.

Finally is Dashboard Hula. It is a pilsner we are making in conjunction with Public Art Co. in St. Charles. The beer itself has a real tropical taste and feel to it from Azacca and Ekuanot hops. It will come out in August and Public Art is designing the label now. They will have a release event that will include the beer and a swag bag which will have a shirt, can koozies, stickers, and more. No date is set yet. They are hoping to do a pig roast in conjunction with the release, provided it is safe for large groups to gather.

Not beer, but mead can be as great as beer during these hot summer days. 4 Brothers Mead is located in Festus, and if you have not given it a swig, you’re missing out on something special.

Four Brothers Mead is unlike anything you’ve tasted before! This is truly an old Norse traditional Viking style Mead. They do not put any additives in our Mead. Only honey, water, and yeast. The process is unfiltered which yields a bold, flavorful, hearty, raw tasting Mead.

For summer, they have 6 flavors, with more coming. Give their peach, blueberry, and strawberry a try, and even their chocolate mead. It’s lite and very swigable.