When you see a beer label depicting a plastered Santa Claus face down in the snow, you absolutely have to write about it.

While we’re all hoping poor Santa didn’t bust his schnoz, we are assured that the fall was well worth it, as his sprawling image on each can of Whiskey Scented Santa marks the unofficial beginning of the Christmas season at Charleville Brewing Company.

Right away a beer called Whiskey Scented Santa begs the question, “how did you come up with that name?” 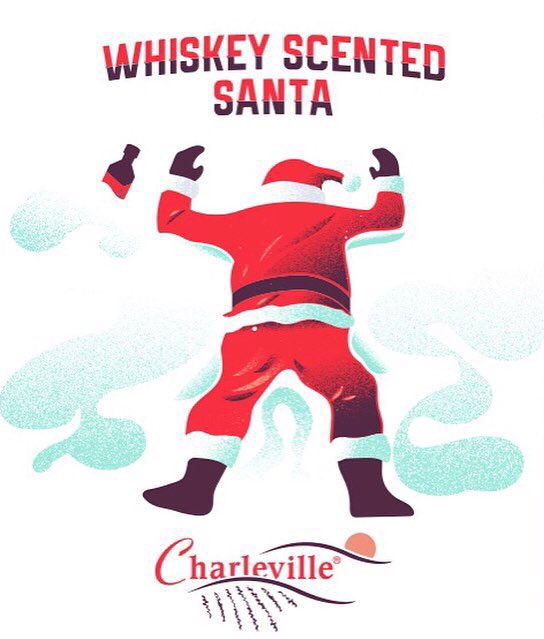 pens when a bunch of beer lovers are sitting around the table after a few drinks and someone remembers that smell from when you were a kid and you had to sit on Santa’s lap,” said Tait Russell, director of sales and distribution at Charleville.  “And the visual of Santa facedown in the snow was perfect.”

From that inspiration, Whiskey Scented Santa is born.  The Imperial Porter is a heavyweight coming in at 10.5 % ABV so take your time. The beer is aged with whiskey-infused oak stave or chips inside stainless steel tanks which allows for more beer to be produced.

“It’s a big beer with a big bourbon flavor that is warm to the tongue,” said Russell.  “You’ll detect hints of fruits like raisins, figs and dates and even some chocolate.”

You can find the six-packs at both breweries.

Have you noticed that there is a National Day for just about anything these days? This past Saturday, September 27th was National Beer Drinking Day, not to be confused with National Beer Day, National Drink […]

Drink beer, help out a playground

The drive to Festus is a straight shot down I-55 south from downtown St. Louis.  If you make the drive this Saturday, you will be rewarded my friends, rewarded indeed. Because if you do, you […]