With all that is going on in the world, it really is time to celebrate our freedom as Americans.  Independence Day is upon us. It is a weekend of fireworks and flags. Koozie factories across the nation are working overtime this week. Hot dog farms are at capacity. What better time, I wonder, to drink a good beer? There isn’t! And I know you 314’ers hate to come unprepared, so I’ve brainstormed my best suggestions for the perfect Independence Day six pack of available locally or regionally produced, bottled beer.  Drink up!

It’s only fitting to begin with St. Louis oldest local brewery.  Schlafly’s American IPA is a twist on a beer style that dates back to the days of our actual independence.  IPA’s date back to England in the late 1700s.  They were brewed for export to the British soldiers serving in India.  Spoilage being a problem during the voyage to India, brewers added natural preservatives: more malted barley, for a higher alcohol content, and more hops. In recent decades, with growing appreciation for highly hopped beers, American craft brewers have revived the style, embraced it, and incorporated new hop varieties.

Schlafly’s American IPA uses 100% American hops and its deep gold and full body from pale and crystal malted barley. A blend of Amarillo, Centennial and Simcoe hop varietals imparts AIPA with bitterness and prominent aromas of citrus and fruit. 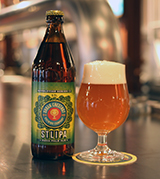 They pronounce it “sta-leep-ah”; but we pronounce it STL-IPA, which is the acronym for St. Louis India Pale Ale.  It’s actually a double or Imperial IPA.  It’ll pour hazy and if you like your beers hoppy, you’ll love this on your tongue. You’ll get some subtle fruits in the swallow.

UCBC, has its roots in the German brewing tradition but this beer is fully an American creation, part of UBCB’s Revolution Series, which is dedicated to introducing you to movement of American craft beer is occurring in transformational cities like Denver, Boston, Portland, Seattle, and St. Louis.

So celebrate the American Revolution with this beer born of the new revolution in American beer.

It wouldn’t be a list celebrating American / St. Louis beer without a solid American made Pale Ale.  And from a brewery that celebrates our nation’s most celebrated river, the Old Mississippi.

This gem from our friends in Murphysboro, Illinois is one of our favorites.  These brewers go heavy on the American Cascade hops giving it a hoppy spicy flavor. You’ll find a this Pale Ale balanced with just a hint of caramel malt sweetness. A delicious American Pale Ale full of fragrant and flavorful hops. 6% ABV.

Wheat is America’s crop.  Wheat farmers harvesting their crop from sunrise to sunset is the landscape picture of what America is at heart.  So a standout wheat beer from America’s heartland is must for our list today.

Our choice, O’Fallon Brewing Company’s Wheach, a peach wheat beer that is extraordinarily drinkable and perfect for backyard barbeque.

Wheach pours a refreshing, yet hazy yellow-orange and gives off a wheat aroma with hint of the peach.  Not overwhelming in anyway.  If you like wheat beers, you’ll be pleased – again that peach is pretty discreet.

If I could find a nice blue beer, it would probably make the list, but till then we need a Red to represent the Old Glory.  For this beer, 4 Hands uses Centennial Hop as the centerpiece of this Red Ale, and they deliver.  Like wheat, Americans love hops, so you will be rewarded with solid hoppy flavor, with a fairly good punch for a Red Ale.  We like the fruit at the end which makes this beer that more drinkable on a hot day.

It pours crimson in color, and you’ll get that fruit on the nose pretty quickly.

Today is a day to celebrate our independence, but the history that came after that deserves some celebration too.  So being that we’re based in St. Louis, the “Gateway To The West,” we felt we needed a beer to honor the Westward Expansion and our rich gunslinger past.  Aside from creating another fantastic label, Crown Valley’s Gunslinger Double IPA is a robust, highly malty and hoppy brew.

This Double IPA delivers on the flavor with a balance of malt and hop, of which there are 5 in this beer.  After the addition of Columbus, simcoe, centennial and citra hops at various points of the brewing process, this beer reaches the final IBU count of 93, so be ready.

And there you have it. Have some good beer this weekend. And happy Fourth, from your friends at Drink314.net!

Here’s the pour list for La Cumbre Brewing, the special guest at Wolpertinger ’18

Imagine throwing yourself a birthday party in your own house, using all 70,000 feet of your available home and inviting 35 of your bestest friends and several thousand others just for fun.  That is exactly […]

4 Hands Releases 2 stouts As we deal with the return of colder temps this week it reminds us that we have a lot of winter still to go. So, while we may not have […]

If you have not had a chance to try out Urban Chestnut Brewing’s ‘beer survey’, the latest version should entice you to try one out. The “survey’s” are offered at the breweries Urban Research Brewery, […]